The latest from the French Elite Championship in partnership with TreizeMondial.fr

First wins for Lyon and Lescure

Every Elite 2 Championship team has now won at least one game. Lyon, after three straight losses, beat defending champions Baho, who continue to have a poor start with suspensions and injuries hitting them hard. Meanwhile, Lescure finally got off the board after successive defeats by beating Toulon by the bizarre scoreline of 36-1.

Last season’s two semi-finalists, Carpentras and Pia had an appointment for the big game of round 4. Despite a number of injuries, Pia won even after trailing 14-2 at half time.

There was a close game between Salon and VARL, as Vinnie Anderson’s VARL eventually pulled away to win 36-16.

Entraigues and Villefranche met to fight for top spot in the Elite 2 Championship. Unbeaten until then, Villefranche led 12-0 inside 20 minutes but Entraigues fought back to win 29-18.

The Moroccan halfback Iliass Laachiri, an African Cup of Nations finalist, has joined Carpentras. A big boost for Jérôme Alonso who lost Hugo Bravo early in the season. 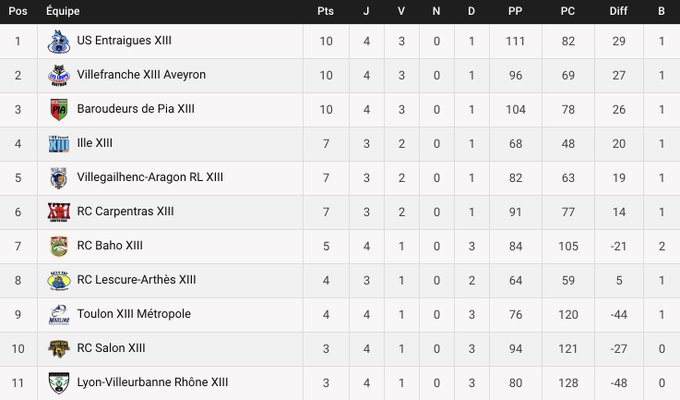