Lezignan have boosted their pack with the signing of 112kg forward Corey Davis. The Kiwi can play in every forward position and played for the Wynnum Manly Seagulls in Brisbane Rugby League in 2019, the competition where Tony Tumusa came through before joining Carcassonne.

Limoux are the only team with two wins from two at the start of the French Elite 1 Championship season, having followed up their opening round win over Lezignan with a 26-10 win over Palau.

It’s a second defeat for Palau, who were comfortably beaten again having lost to Avignon at the French Magic Weekend.

St Esteve, who impressed in their opening round win over Carcassonne, were beaten 32-16 at home by Lezignan, despite another try from Corentin Le Cam. Damien Cardace scored a brace of tries for Lezignan, who denied their hosts a bonus point.

After their first game was postponed, St Gaudens led for 75 minutes in their opening game of the season against Albi, but were beaten 21-14, with Baptiste Fabre scoring nine points.

Carcassonne’s game in Avignon was postponed due to a waterlogged pitch, while Toulouse, who had their opener called off due to illness in the camp, once again weren’t in action – their game at Villeneuve postponed. 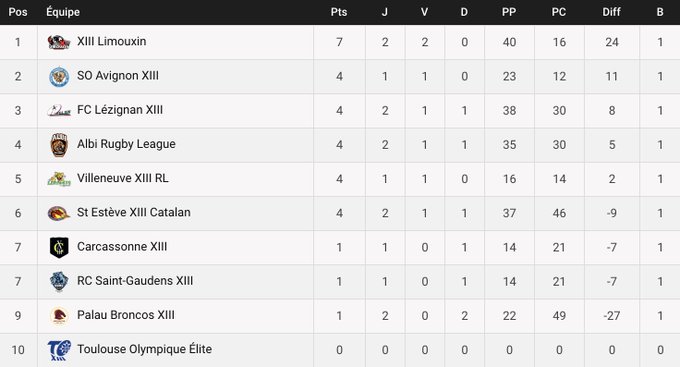 Villefranche went top of the table after following last week’s big win over Lyon with a 50-10 demolition of new boys Ille, who sit fourth in the table.

Salon, well led by their foreign recruits, were 54-16 winners over Toulon, while Carpentras made it five wins from six by winning away in Lyon.

Lescure registered only their second win of the season, winning 32-14 away at Entraigues. 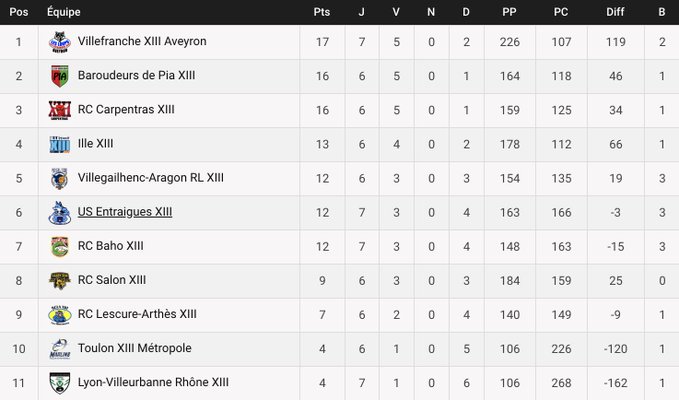