St Esteve went top of the French Elite 1 Championship with a 26-16 win over Villeneuve.

Young half-back Cesar Rouge scored a brace of first half tries after Mike Melhout had given the Leopards an early lead. Maxime Jobe stretched the hosts’ advantage to 18-4 at half-time.

James Tuitahi reduced the arrears after the break before Rouge’s hat-trick try put the game beyond the Leopards, despite them getting back within eight with 15 minutes to go.

Carcassonne are a point behind St Esteve in third place after a 30-18 win over Albi.

They were always in control of the match, leading 18-6 and 24-12, only for Nittim Pedrero’s unconverted try to bring Albi back within eight points.

Their hopes were soon extinguished by Joe Drodrolagi, but the Tigers did at least secure a defensive bonus point with a late Charly Goze penalty goal.

Carcassonne coach Frederic Camel said: “The lack of pace and competition for more than a month may partly explain some shortcomings but we will nevertheless have to raise our standards if we want to win in Perpignan on Saturday.”

St Esteve host Carcassonne in a top of the table clash this weekend.

Avignon continue to climb the rankings as Tony Gigot once again inspired them to victory, this time 26-2 over St Gaudens.

He set up two first half tries for Olivier Arnaud and then scored one himself, as the Bisons led 16-2 at half-time.

They dominated the second half but had to wait until 10 minutes from time to add further scores, Gigot laying a try on for Sofiane Ghanem and then Louis Jouffret rounding off the scoring with a try under the posts.

Avignon are now up to fifth in the table, though they have played the most games in the competition (11).

St Gaudens’ recent 24-12 win over Toulouse has been chalked off the record, after a complaint was made about the number of overseas players on their team sheet. The case was won by Toulouse and so the game has now been awarded 30-0 in their favour.

Coach Julien Gerin was far from happy. He said: “I have doubts about the validity of the research carried out by the commission and would like to know the eligibility conditions for international players. Our foreign player is considered French according to international regulations so I don’t understand.”

Catalans Dragons will prepare for the new Super League season with a pre-season game against an Elite Championship select side. 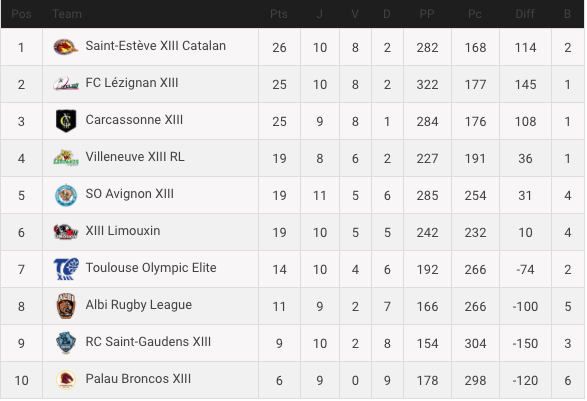