Carcassonne all but sealed top spot in the French Elite Championship with a 20-12 win over Toulouse.

It was a similarly tough encounter to the previous meeting between the two sides a few weeks previous, despite them being at opposite ends of the table.

Missing Lucas Albert, ruled out until the end of the season with injury, the Canaries were also without prolific points scorer Clement Herrero. Two tries in three first half minutes helped them to a 12-6 half time lead and they kept their opponents at arms length after then.

Only Lezignan can mathematically catch the Canaries now, though that would require them to win both their remaining games with a bonus point and Carcassonne to lose their last remaining game without earning one.

Lezignan got the better of Albi in a game that saw 80 points scored.

Lilian Albert scored three of Lezignan’s 10 tries as they defeated the Tigers 54-26, with scrum half Remy Marginet recording 18 points from one try and seven goals.

Limoux rounded off their regular season campaign with a 62-12 thumping of bottom side St Gaudens, to propel themselves in to second spot.

With games still to play, the Grizzlies are likely to finish fourth in the table, but will at least have a home match in the play-offs.

They scored 11 tries in this one, with two apiece for Tony Maurel, Quentin Garrouste, Yann Belmaaziz and Maxime Peault.

Villeneuve hurt St Esteve’s top two hopes with a 22-8 victory in what was a timely reminder of the Leopards’ potential threat in the play-offs.

The Leopards started the season brightly, but fell away in the middle third and the best they can hope for is fifth spot, but this result may well make others sit up and take notice.

Palau consider dropping out of Elite 1

Palau Broncos are to make a decision on their future in the Elite 1 Championship within the next month, after reports that they may ask to be demoted to Elite 2. Citing the impact of COVID, which the club says lost them around 30% of their budget, it would be a blow to the FFR’s plans to expand Elite 1. Palau are currently 8th in the table, and coach Benoit Albert has already confirmed his departure.

Return of fans in France

After the return of fans to games in England on Monday, Catalans are set to welcome back 1,000 fans for their upcoming home games against St Helens this Saturday and Wigan. The Dragons had previously been the last club to host fans at a Super League match, when 5,000 went to their game at home to Hull KR back in October.

Catalans are on the lookout for a half-back to replace Josh Drinkwater, whose contract expires at the end of the year. Reports have linked them with a move for St Helens’ France international Theo Fages, but he is set to make a switch to Huddersfield. The Dragons do have a highly-rated young half-back in their reserve side in Cesar Rouge. 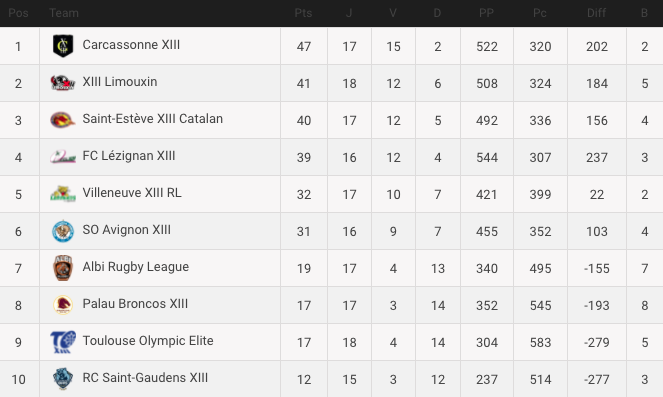 All the latest from across the Channel with TreizeMondial.fr

About James Gordon 7110 Articles
Love Rugby League editor. Founded the website back in 2005. Worked with a range of clubs and sponsors during that time. Also commentates for BBC.
Website Twitter LinkedIn