The French Elite Championship play-offs get underway this weekend.

Limoux host Avignon, while Villeneuve travel to Catalans’ reserve side St Esteve, with the winners going through to the semi-finals against Carcassonne or Lezignan.

Avignon have been weakened by the recent departures of Tony Gigot and Pat Moran to Toulouse and London respectively, while St Esteve have been out of form in recent weeks, as well as losing some of their young stars to Super League duty.

The regular season came to an end with wins for Villeneuve and Carcassonne against basement boys St Gaudens.

The Leopards are hitting form ahead of the play-offs, running up a 52-6 away win, while minor premiers Carcassonne won 36-24.

Heading for the exit door

Julien Gerin has stepped down as head coach of St Gaudens following the end of the season, with former Leeds and Toulouse centre Eric Anselme linked with the post.

Former France and Scotland hooker Kane Bentley has also departed St Gaudens, to move back to live in Catalan, though hasn’t yet made a decision on his playing future.

Club captain Cyril Moliner played his last game against Villeneuve, and has decided to retire from the game.

The France national team met up for a training camp last week, albeit without several UK based players, plus backroom staff Sean Long and Trent Robinson.

Head coach Laurent Frayssinous said: “The training sessions were particularly intense and all the players were 200% involved! It’s a healthy group that has adhered to the project and the philosophy of the game that we want to adopt. Everyone is mobilized and determined to perform for the World Cup!”

Our friends at Treize Mondial are polling for the best young player in the Elite 1 Championship. 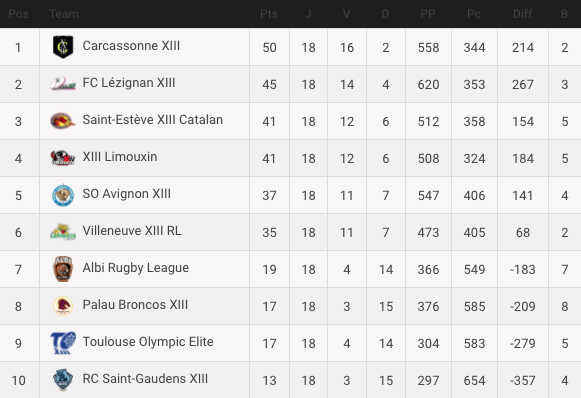 About James Gordon 7157 Articles
Love Rugby League editor. Founded the website back in 2005. Worked with a range of clubs and sponsors during that time. Also commentates for BBC.
Website Twitter LinkedIn