A group of Salford fans are putting pressure on local leaders after the club’s long-term future was cast into doubt following reports of talks to sell their AJ Bell Stadium home.

The Red Devils moved to the 12,000-capacity venue in 2012 after leaving their spiritual home at The Willows but throughout this time they have been saddled by prohibitive running costs agreed by the club’s previous management.

In a statement earlier this week, the club said: “Our current tenancy agreement is simply unsustainable for the club and we have been seeking a new deal on terms that we can afford.

“Any ownership changes to the stadium that increases our rent above what is financially viable for the club would be devastating.”

Despite this, under the stewardship of Executive Chairman Paul King the Red Devils have made huge strides off the pitch in recent years, appearing in the 2019 Super League Grand Final and the 2020 Challenge Cup Final.

Now, however, that momentum has been curtailed following reports that co-tenants at the AJ Bell Stadium Sale Sharks rugby union club have been in negotiations to buy the stadium, prompting fans to put pressure on local politicians in the run-up to next month’s mayoral and council elections.

A spokesman for newly-formed fans action group ‘Salford at Heart’ said: “This stadium was built by the people of Salford as a fitting home for our city’s elite professional sports club, Salford Red Devils, and as a lasting legacy to benefit the youth of our city.

“Our city has a proud sporting heritage, with our club acting as a source of pride for almost 150 years, and boxers like Jamie Moore, Steve Foster and Stephen Foster Jr and – more recently – the emergence of Salford City FC all providing inspiration for our young people.

“Our belief is that our stadium should – first and foremost – benefit the people of Salford and provide a fitting arena for the elite sports teams representing our city, as well as community facilities for the young people of our city.”

With May’s elections looming, the group plans to seek assurances from local political leaders that the club’s long-term future at the stadium is secure.

So far two of the four candidates vying for the position of City Mayor – Liberal Democrat Jake Overend and Stuart Cremins of the Republic Party – have pledged unequivocally to guarantee the club’s future at the AJ Bell Stadium but organisers are keen for the other candidates to follow suit. 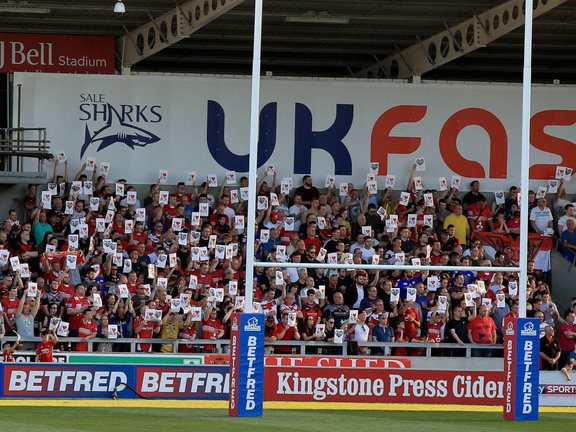 Council leaders issued a joint statement yesterday offering some assurances but stating only that “no decision has been taken on whether to sell the AJ Bell Stadium” and confirming that an approach has been made.

This has prompted Sale Sharks to put out a statement of their own denying that a formal offer has been tendered and calling for a public meeting between Salford City Council, Peel Holdings, Salford Red Devils, Sale Sharks and Salford City FC.

Sale first attempted to purchase the AJ Bell Stadium in 2017 but the offer was turned down and labelled “unacceptable” by Deputy Mayor John Merry.

More recently, the Sharks bid to return to their home town for the first time since 2003 were scuppered after fierce opposition from residents and local sports clubs to the Sharks’ plans to build a new venue at Crossford Bridge.

Prior to moving to the AJ Bell Stadium, the Sharks were based at Stockport County FC’s Edgeley Park between 2003-2012 after leaving their Heywood Road home, which is now the home of Swinton Lions.

In 2018, Stockport County FC were forced to issue a statement refuting claims that the Sharks were considering a return to the ground, stating that they were “clearly disappointed” and adding that “this has created a great deal of concern and negativity among our supporters.”

The Salford at Heart spokesman added: “After so much rumour and speculation in recent weeks it’s a relief that this issue has finally been dragged into the public domain.

“The people of Salford deserve more than vague assurances and empty platitudes though; we need firm guarantees that this venue will remain primarily a home for the professional sports clubs representing our city and, with the local elections on the horizon, this is our opportunity to make our voices heard and – if necessary – our votes count.”

“We have no problem with our club ground sharing with anyone if it adds to the financial viability of the venue but it has to be remembered that this ground was built by the people of Salford as a home for our club.”

Fans are being encouraged to follow @RLSalford on twitter and lend support in any way they can.