England have released their new kit for the upcoming World Cup, with the white and blue design splitting opinion.

Manufactured by OXEN, the kit will be worn by the men’s, women’s and wheelchair sides later this year.

We’ve had a look at all the England shirts launched since the last home World Cup back in 2013.

The newest of the lot, announced this July, to take England to the World Cup. 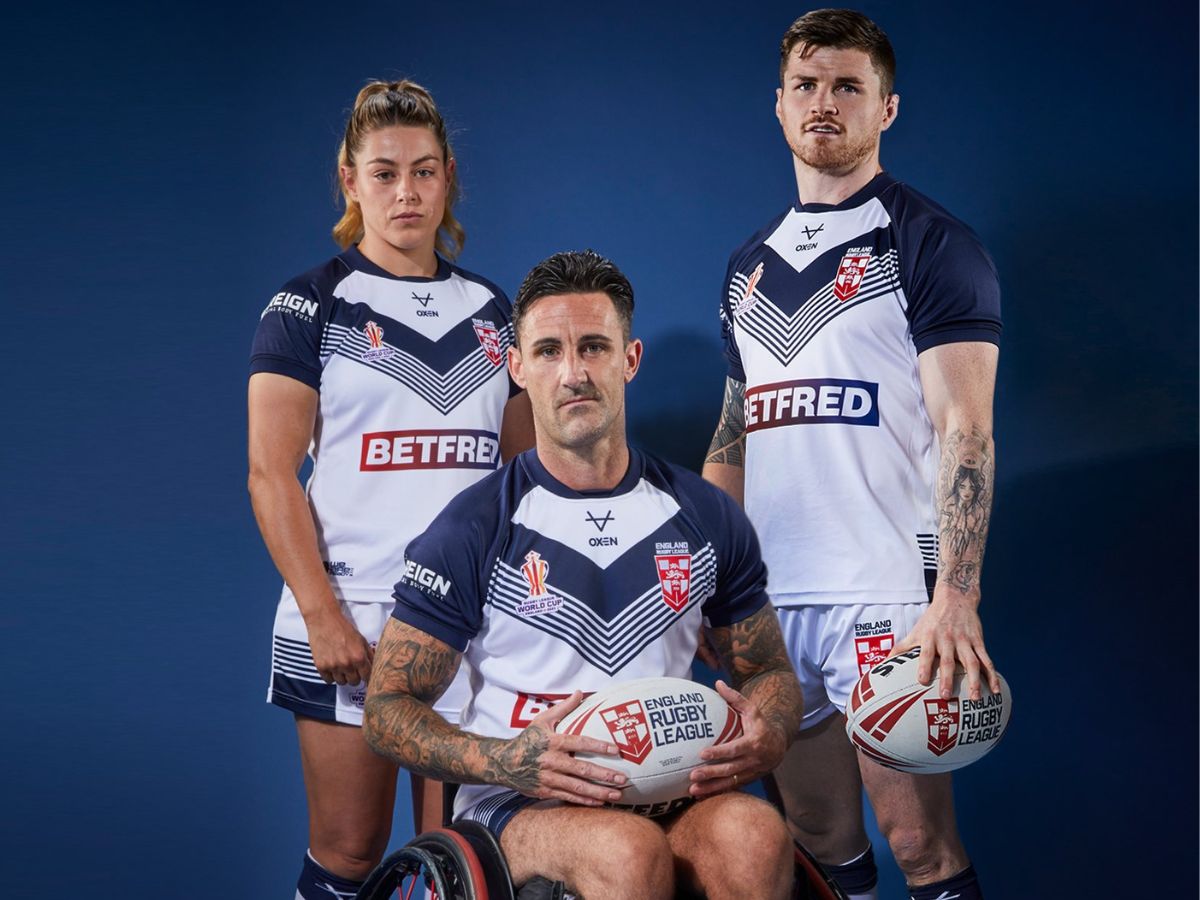 England shirts have regularly been white with red, so the blue came as quite a shock to some.

However, white and blue is regularly used as the colours of the England national team in other sports, notably football. 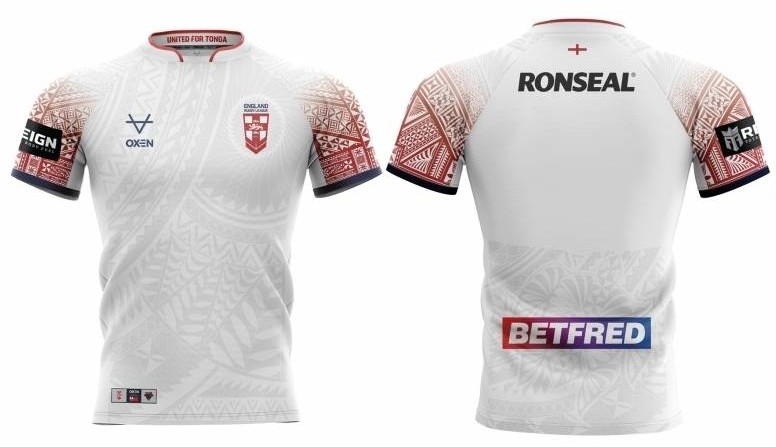 It’s not the first new-look England shirt of the year.

For the mid-season international against Combined Nations All Stars, England supported the Tonga Tsunami Relief Fund.

A special England kit was worn, featuring tribal patterns on the sleeves, for the one-off match.

The All Stars played in a Tonga tribute kit – and £10 of each sale of both jerseys went to the fund, to support the victims of the tsunami.

The wheelchair side wore it in their test matches against France, while the women played against France and Wales wearing the kit. 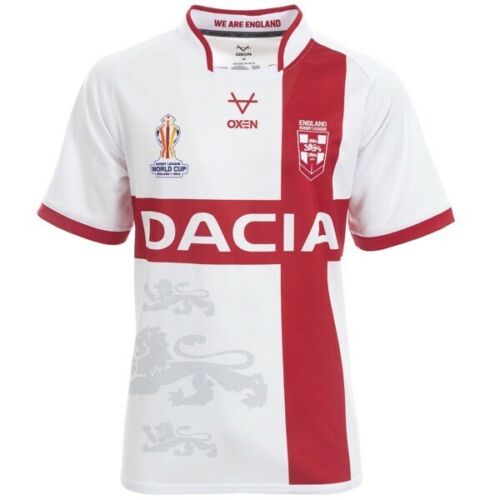 This may well become something of a collector’s item in the future – an England World Cup shirt that never saw a World Cup.

It was launched back in June 2021 as OXEN’s first design as supplier of the England team.

Unfortunately, the pandemic put paid to the tournament and it was postponed a year.

They did wear the kit against Combined Nations All Stars in 2021, though of course it didn’t have the World Cup badge.

The version they wore against France last October did feature the World Cup badge though.

The women and wheelchair sides also wore their World Cup version in their respective tests with France.

There were no full internationals in 2019 due to the Great Britain tour, but England still featured in the Rugby League World Cup 9s.

That meant that a shirt was released for the men and women to play in during the tournament in Australia.

It proved to be the final official shirt that Hummel released, as there were no full internationals in 2020 and by 2021, the RFL had moved to an alternative supplier. 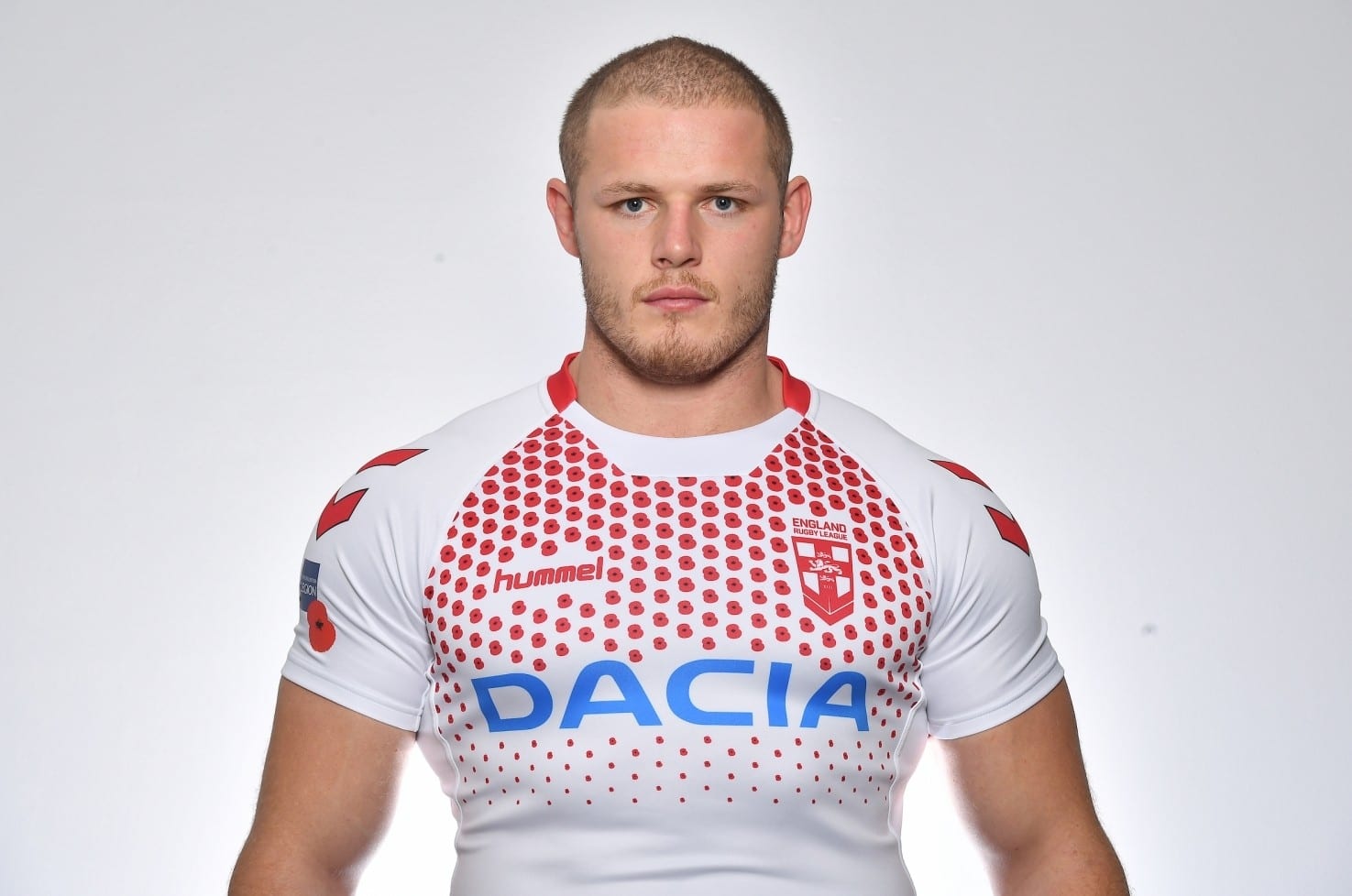 The last series that England played was at home against New Zealand, nearly four years ago.

The third test at Elland Road marked 100 years since the end of the First Wolrd War, so England wore a special commemorative jersey covered in poppies. 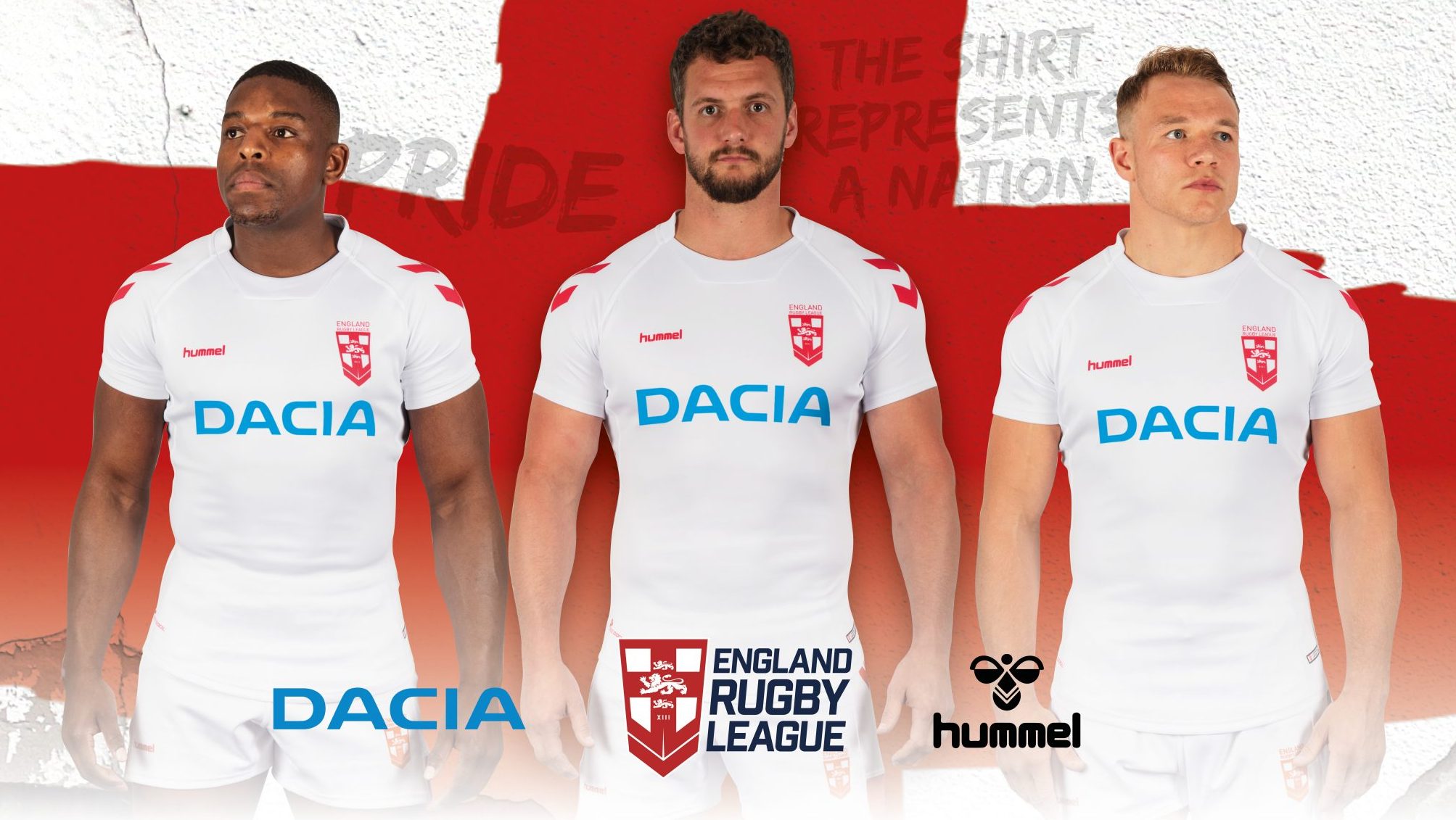 The original version of the above shirt was at least worn in the wins in the series – as England beat New Zealand at Hull and Anfield.

The big outing for this kit though, sponsored by Dacia and manufactured by Hummel, was in Denver, USA.

England beat New Zealand 36-18 at the Mile High Stadium in a historic test match across the pond in front of 19,320.

This was the first shirt made as part of the RFL’s four-year partnership with Hummel. 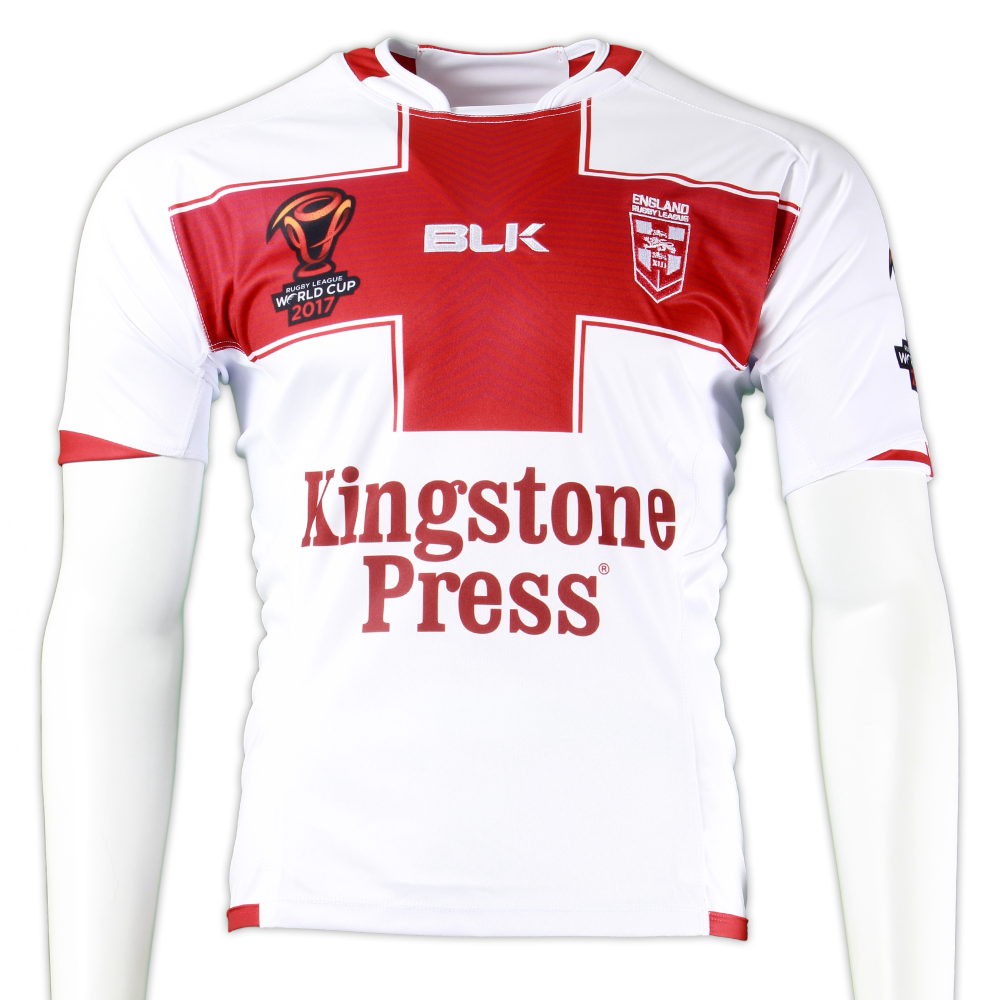 This was the kit worn as England reached the World Cup final in Australia.

Manufactured by BLK, it was sponsored by Kingstone Press, who had grown their involvement in rugby league having sponsored the Championship competitions.

This kit was first won in the mid-season test against Samoa in Campbelltown. 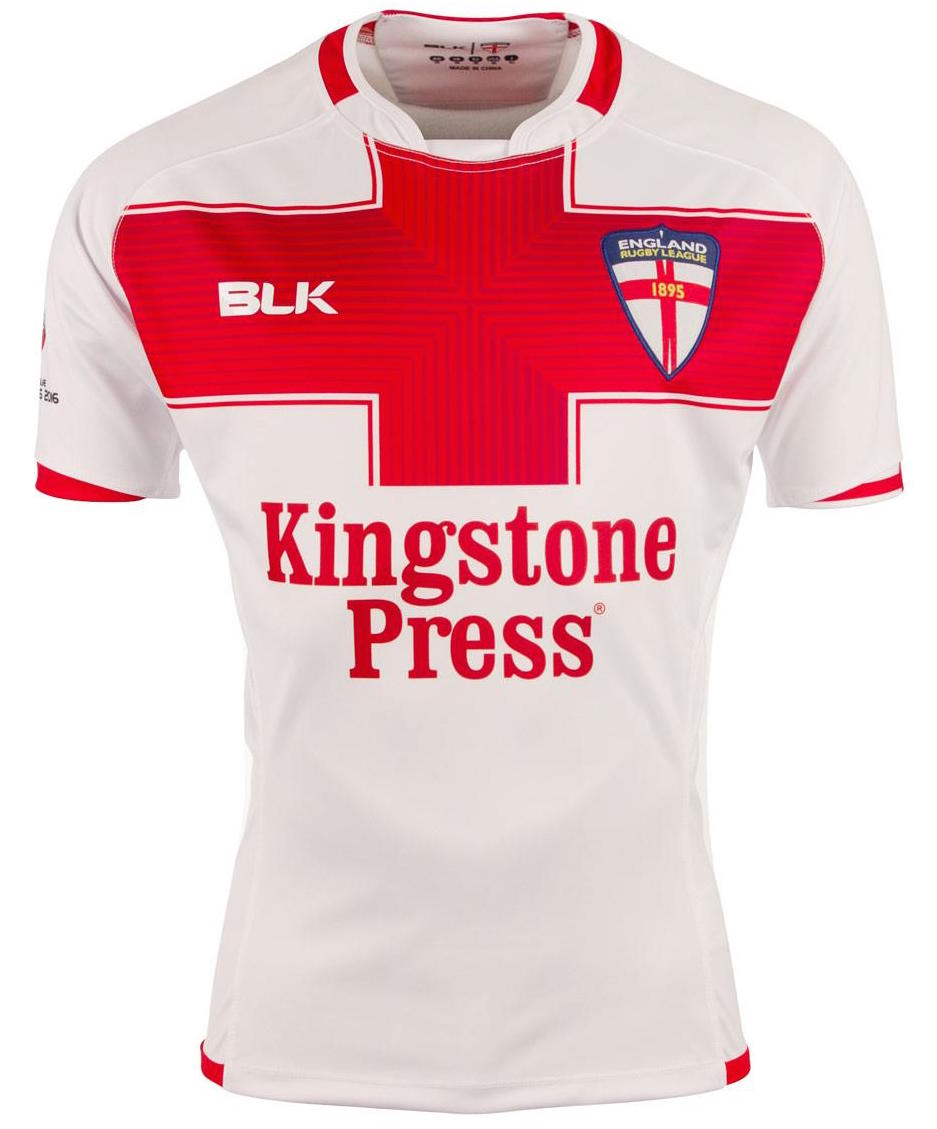 The World Cup kit was a slight variation on the kit worn for the 2016 Four Nations the previous year.

A rebrand for England Rugby League meant a new logo was in place for 2017.

While the presence of the World Cup logo for the tournament, meant the BLK branding was moved from left to centre.

In essence, it was the same kit – just with a few minor details changed; and so really, the 2016/17 kit was the most worn. 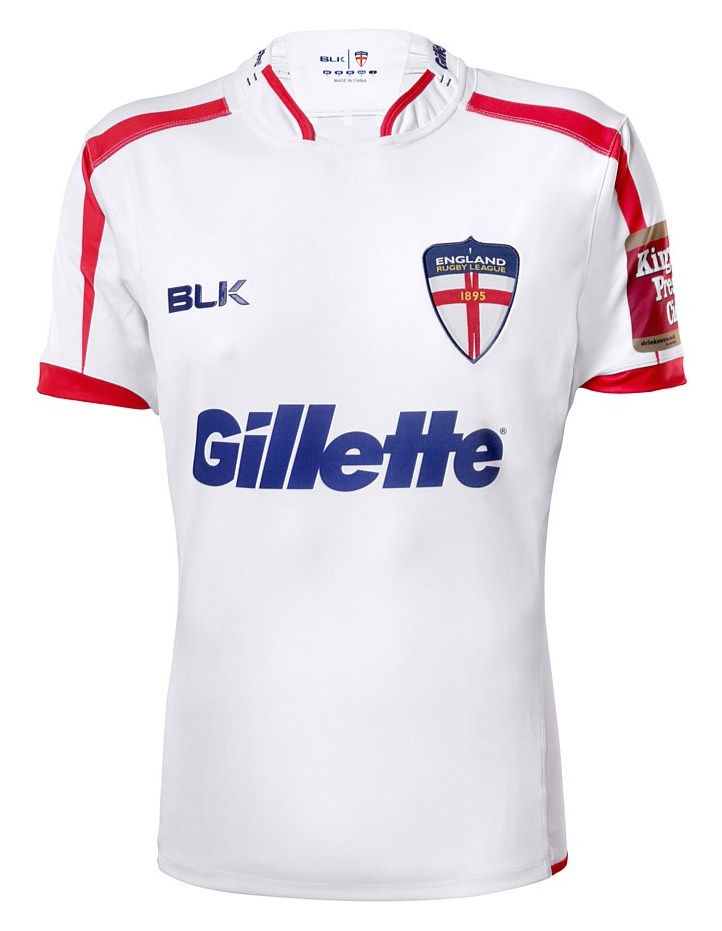 What proved to be the final shirt featuring long term sponsors Gillette.

The ‘Wall of White’ shirt was used for the autumn internationals against New Zealand and France.

It was the first to be made by BLK, following the move away from ISC.

It also featured Kingstone Press branding on the sleeves. 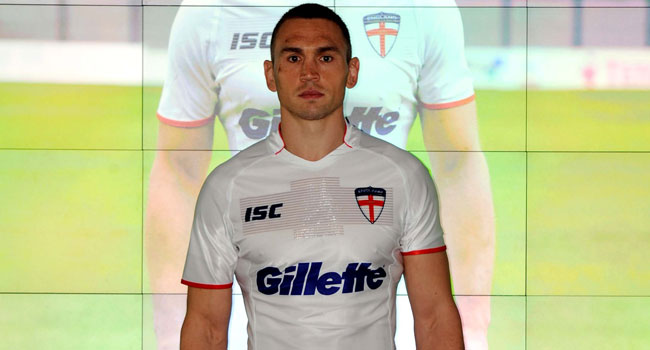 The England rugby league shirt worn at the last World Cup was also kept for the 2014 Four Nations.

Manufactured by ISC, it had the Gillette branding on the front, which had become synonymous with rugby league internationals.

It featured a subtle St George’s cross on the chest.

What do you think of the new England rugby league shirt? And how many of the above have you got in your collection? Let us know in the comments below

About James Gordon 7110 Articles
Love Rugby League editor. Founded the website back in 2005. Worked with a range of clubs and sponsors during that time. Also commentates for BBC.
Website Twitter LinkedIn