There were a few stories of people having left day one of Magic Weekend after 75 minutes of Catalans’ dramatic win over St Helens.

At 30-12, it looked like a good day at the office for the back-to-back reigning champions and a good week where they had seen off surely the only two genuine contenders for displacing them.

Steve McNamara’s men had other ideas though, and created feel-good history with a remarkable comeback to win the League Leaders’ shield courtesy of a mammoth golden point drop goal by exit-bound Australian James Maloney.

McNamara guided the Dragons to safety in the Million Pound Game just four years ago, and has since won at Wembley and now this.

The much-maligned former England and Bradford coach is now just one gong away from having the full set in Perpignan – and he is doing that amongst a backdrop of bringing through and developing young French players which will surely be of benefit to the France (and maybe England) national team.

Fans in Yorkshire (and Wigan) may disagree with the assertion that there are only three contenders for Grand Final glory.

It is true that, on their day, Castleford can beat anyone and for me (for now at least), have the best coach in the land. And Leeds have history of winning it from fifth. 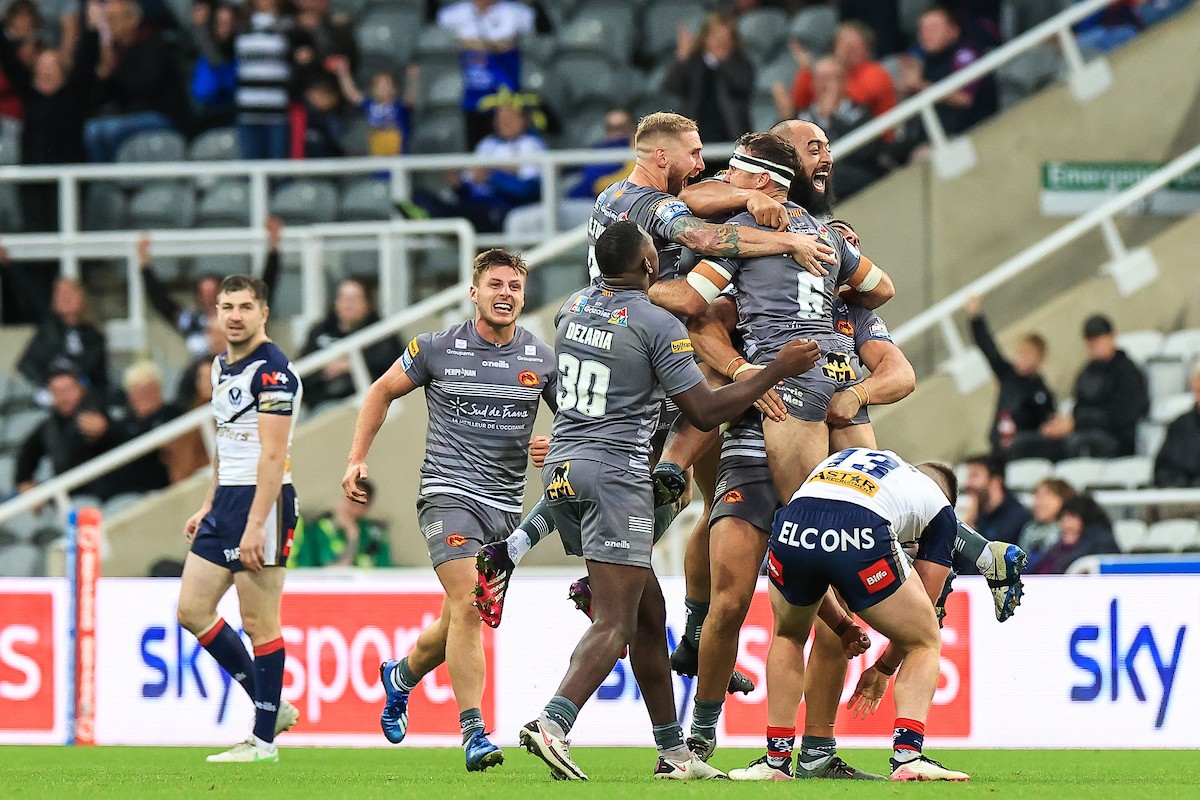 There’s a murmur going round that one of the reasons Sky Sports reduced the broadcast deal was their growing frustration at the number of empty seats in grounds.

Magic Weekend does little to temper that, with the format of having three games on one day meaning that even if you sold every seat in the place, many will be empty at any given time.

Unfortunately, it’s never even close to being a sell out anyway.

On the road games in packed grounds would look far better than holding three games in one ground on one day, though I acknowledge I’m in the minority when it comes to not being the biggest fan of Magic Weekend.

Another thing about Magic is it’s turned in to some sort of charity awareness occasion to flog kits.

Now there’s nothing wrong with supporting charities and given the communities surrounding rugby league it is vital that the clubs are seen to do so.

It just feels like the charity kits or initiatives that are rolled out for Magic Weekend could be utilised on another round of games.

The purpose of Magic Weekend was surely to capture the imagination of the wider public.

Yet the teams on display are unrecognisable to the casual fan.

Brand and identity has gone out of the window – and rugby league can ill afford to miss out on building that back up when it has the opportunity.

The game of the season took place with St Helens playing in white and blue, and Catalans in a dull all grey. Why?

If showing support for charities is the biggest priority of Magic Weekend, then maybe clubs can negotiate replacing their main shirt sponsor with a charity for this one game but do it on their traditional home kit and identity.

“But that’ll devalue the sponsorship” I hear them cry. Well, so does wearing a random coloured strip on the biggest occasion (and therefore marketing opportunity) at least eight of the clubs will feature in this year.

The pattern of behaviour when it comes to money suggests that maybe there’ll be some miffed that the £100,000 prize money for finishing top of the table is heading to the south of France rather than remaining in the inner circle where it literally always has been.

Catalans are the first team ever from outside the north of England to win the league, just as they were when they won the Challenge Cup in 2018, and while they won’t be champions unless they win the Grand Final at Old Trafford next month, they are being held up as a bastion of hope for the future.

For them to be joined by Toulouse in Super League in 2022 might just be the shot in the arm the powers that be in the heartlands need.

A FRENCH REVOLUTION: Toulouse have Super League in their sights after 20 year wait

It seems odd to say that the fate and strength of English rugby league appears to currently be in the hands of two clubs from overseas, but such is the lull that the game has got in to, maybe it’s not far from the truth.

One thing is for sure, the proposed re-alignment of Super League with the RFL needs to be boxed off quickly, as does confirmation of yet another change to the structure of the professional leagues.

Whatever those at the top to decide, it is vital that rugby league doesn’t squander potential opportunities displayed in what has been an exciting and encouraging League 1 season.

Big-spending Barrow and Workington of Cumbria lead the way, with a resurgent North Wales Crusaders now playing on the Welsh coast providing encouragement that the Principality could one day make its way back to Super League.

MORE THAN BEAR-ABLE: Supporting a club outside the heartlands

The development of the game in Coventry and even the small progress made by West Wales is the organic expansion that rugby league needs – something that doesn’t happen with quick overnight fixes.