It’s rare that you meet someone that has watched rugby league that doesn’t have great admiration for it’s nature.

A tough, honest and eye-catching sport that is easily-watchable both on the terraces and on TV, those of us that bleed the sport are sometimes guilty of being caught up in the infamous rugby league bubble, without realising that the game is slowly losing what made it attractive to outsiders in the first place.

Last week, we had a visitor from the west country to the office. He told tales of how he became attracted to rugby league by watching the great Widnes and Wigan teams of the 1980s and 1990s, and how it was hard to believe that the sport had lost its way in the interim. 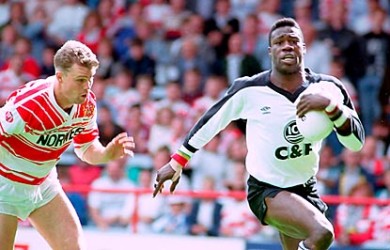 Now living in France, we had an interesting conversation regarding the logistics of overseas teams, notably Toronto, and my uncertainty over the growth of Super League when many of its foundations like stability.

On the contrary, it’s the atmospheric beauty of a night match in Castleford that showcases the magic of rugby league, and while there is obviously a place for Toronto and others moving forward, rugby league ought not to lose what’s made it what it is – even if it is a pale shadow of itself from two decades or so ago.

That raised the question of confidence – rugby league doesn’t believe in itself.

When the BBC completely ignore that they are televising the Great Britain test match, yet are able to promote women’s tennis and Barbarians v Fiji rugby union, rugby league doesn’t appear to have the confidence to knock on the door and ask why. That stems from the fear of the BBC perhaps taking their ball home, and neglecting to show Super League highlights or indeed the Challenge Cup, which ultimately is clinging on to its status as a jewel in the sporting crown of Great Britain.

So today it's the #ChallengeCup semis, one of the biggest days in the #rugbyleague calendar, and live on the BBC.

So naturally, they ignore it on their breakfast news sports bulletin in favour of…….wait for it………thumb war!

All of the rights to Super League and the Championship sit with Sky Sports, and yet the broadcaster has barely shown any action from the second tier since regaining the rights five years ago, save for when Toronto were able to foot the bill. A lack of confidence in rugby league, and fear that the broadcast deal will be taken away, prevents any real demands being made.

Even when Nigel Wood announced his departure from the RFL, the governing body couldn’t get away without paying him a tidy fee – and just where is that report on New York?

Whenever someone with money comes along, there appears to be an acceptance to take them in – not that that’s a bad thing – but as we have seen too many times, without the proper foundations around it, even the most promising of ventures can collapse. The biggest risk to Toronto isn’t the Wolfpack themselves or even their reliance on owner David Argyle’s wallet – it’s the system they’re operating in.

Some clubs are desperately reliant on their TV money hand outs, to the extent that they have lost awareness of what running a sports club should be like in the social media age. Other minority sports are now showing rugby league the way in terms of generating commercial and revenues from fan experiences, while our clubs sit relatively safe in the knowledge that they’ll get their share of central funding.

The chase to be something it’s not has left rugby league languishing far behind major sports, while also being caught by minority sports that boast far greater participation figures.

There is a paranoia within rugby league about doing the wrong thing, upsetting people or missing out on a financial opportunity. I have been involved in projects that have been significantly marginalised due to red tape and being held back, sometimes by the governing body.

We often have a chuckle at the similarity between social media content pushed out by both the RFL and Super League compared to our own output – logic might say that instead of duplicating the work for the sake of a few shared likes, that maybe we (and others) should be further engaged to help rugby league achieve whatever its goals might be.

The lack of personalities in the sport is often bemoaned too – but when we try to do anything out of the ordinary with a player, clubs get protective and sometimes don’t even offer up a player that should and would hit the headlines.

The status of the sport is typified by those that spend the year bemoaning rugby league, yet are then hyper-critical of the BBC for not providing enough coverage during the Sports Personality of the Year awards. If its own fans struggle to get on side, it’s hardly likely that it will hit the conscience of the wider sporting public.

Here we go the annual moan about the lack of time on SPOTY. The fact is that the sport is a minority one. Its not up to the BBC to promote it. Its up to @TheRFL and @SuperLeague to sell itself and make people notice and the simple fact is that it doesn't hence the short time slot

Given the Great Britain tour was largely regarded as a flop, it’s irrelevant that the BBC broadcast it – they can’t just include sports they show, otherwise there wouldn’t be much to go at. Plus Great Britain exists in plenty of other sports, if not all, and also wasn’t acknowledged, particularly the GB ice hockey team’s achievements in surviving relegation from the World Championship Top Division against all the odds.

Its lack of confidence that its big games like St Helens v Wigan or Leeds v Warrington aren’t enough to attract the attention of the casual sports fan, broadcasters or commercial partners has left it at a crossroads where we barely know where it’s headed from one year to the next. Plonking a commercial bod in London isn’t likely to attract big name sponsors – because that’s not what it’s about. Nor is that what rugby league has ever really been about.

Play to your strengths, and be confident. Give the new fans that Eric Perez talks about – his analogy about seeds growing across Canada reflects the opportunities the Wolfpack have created – the belief that supporting rugby league is something to be proud of.