It’s now more than a month since the Super League restart, and while it has been far from plain sailing, the competition has at least progressed.

Six of the 11 clubs have had players test positive for coronavirus, with the first outbreak just two weeks in to the resumption impacting Hull and Salford, while Leeds have had each of their last two games against Wakefield and Catalans postponed too. 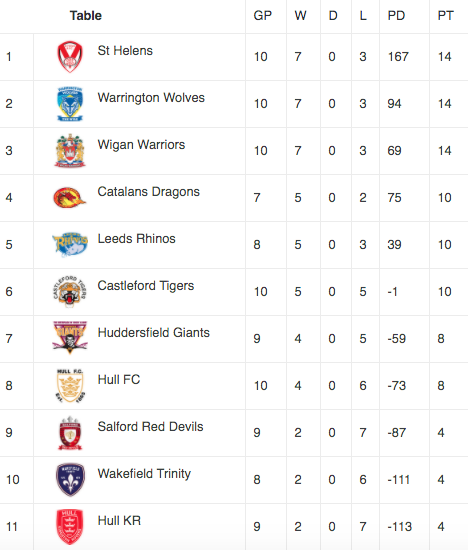 The final round of the regular season is currently scheduled for Thursday November 12.

That leaves – assuming this weekend’s five Super League games go ahead as planned – 60 games (the equivalent of 12 rounds) to be played across eight weeks, and that’s without taking in to consideration the Challenge Cup.

A reduction in fixtures is also an option, though how that would be worked out given some teams have already played each other twice might cause damage to the integrity of a competition that is already threadbare following the withdrawal of Toronto.

In his weekly press conference, Leeds coach Richard Agar said: “I think if we continue to get teams ruled out for two weeks, it’s certainly going to drive some discussions about either cutting the number of games or lengthening the season.

“I don’t know if lengthening the season would impact on the television deal, but I would suggest both options would be on the table given what’s happening. Which way they choose to go, I don’t know.”

Tellingly, no concrete date has been set for the Grand Final, which officials hope will be able to be played in front of a sizeable crowd and help claw back some of the financial deficit suffered due to the pandemic.

That was partly down to the late release of the fixtures for the new football season, with the gap in Manchester United’s calendar pointing towards the Grand Final being on Saturday November 28.

With the revised top four play-offs taking the form of a straight semi-final shoot-out, there would only be one match day between the end of the regular season and the Grand Final – though no doubt those teams would want to have a decent lead in time to the biggest game of the season.

As seen by Warrington’s desire to play their game against Hull last week despite their squad being decimated by COVID-19 restrictions, there is an agreement across the league to do what it takes to complete the season.

On that basis, surely an extension would be a more logical solution – though that could bring in yet more confusion when it comes to player contracts, which typically run out at the end of November.

It is not known too how flexible the agreement might be with Manchester United regarding Old Trafford – United are away the following weekend, December 5.

There would also be the consideration of how an even longer season might harm preparations for the 2021 campaign, especially as there is very little room for manoeuvre there due to the end of season World Cup.