A place in a historic Wembley final awaits the four Challenge Cup semi-finalists this weekend.

For the first time in the grand competition’s 124-year history, the final will be played behind closed doors, following the tightening of restrictions surrounding the coronavirus pandemic which had already forced a delay to October 17.

Three of the semi-finalists have appeared in the final within the last five years, with each of them winning it within the last seven, while for Salford it’s some 51 years since they last reached Wembley and 82 since they lifted the trophy for the first time.

It would be typical of Salford, some fans have said, if Ian Watson’s side manage to get there and their fans aren’t able to enjoy the day, as they did when the Red Devils upset the odds to reach last year’s Super League Grand Final at Old Trafford.

While they don’t have the big-game experience of any of the other three sides in the last four, that run in the play-offs – including the notable win away at Wigan in that run – may at least provide them with some nouse, and the games being played behind closed doors may well benefit them.

Standing in Salford’s way of a Wembley date are Warrington, who they beat in Super League on Tuesday night, albeit with very different squads on show.

One man who will be key to Salford’s chances, and who was rested on Tuesday, is Kevin Brown, who infamously left Widnes to join Warrington to win trophies. If he was to beat his former employers on Saturday, then he would once again be 80 minutes away from getting that elusive Challenge Cup winners medal.

Salford’s preparations have been hampered by a skirmish with the disciplinary panel, that saw them successfully overturn a ban on centre Dan Sarginson, but fail – after two appeals – to ensure forward Luke Yates is available.

Assistant coach Paul Rowley said: “Obviously it’s a shame for him (Yates) and a shame for our team that he picked up a ban but we have a lot of people who are willing to roll up their sleeves and do a lot of graft.

“Yates does a lot of work and to a high standard as well but we’ve got Lee Mossop coming back into the side which is a great addition – he gives us more leadership and he’s a big-game player.

“We’ve got a fit squad and I’ve got no doubt everybody will share that workload.”

For Warrington, last year’s Grand Final is the only time they have failed to reach a final in Steve Price’s tenure – albeit they lost both the Challenge Cup final and Old Trafford showpiece in 2018.

But for Tuesday night’s defeat with a makeshift side, they have won every single game since the restart, even when not playing at their best.

While ending their league title drought may be a priority, Warrington have an excellent pedigree in the cup and have reached six of the last 11 Wembley finals, winning four of them.

That includes their 18-4 triumph against the odds over St Helens last August, when they were missing star man Blake Austin, who will be desperate to get his chance on the big day. 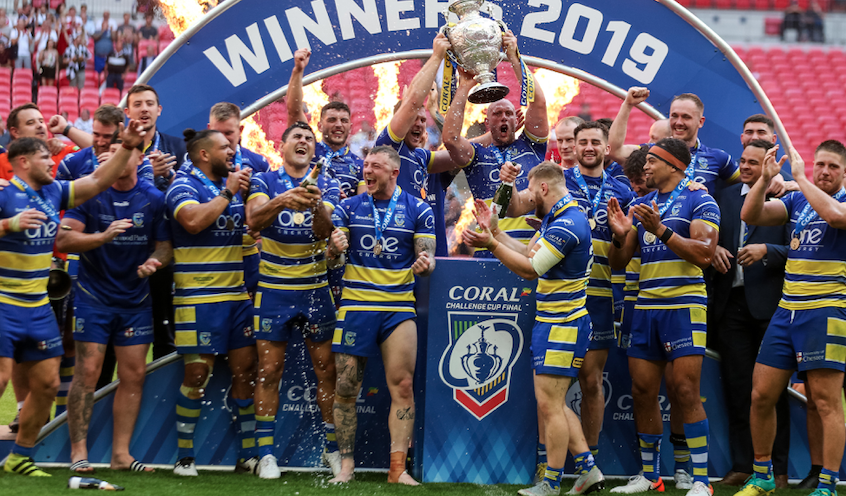 He said: “I really enjoyed watching as a fan but, as a professional athlete, it was certainly a bitter-sweet taste in my mouth to have to sit back and watch it.

“So the opportunity to go back to Wembley and play in a Challenge Cup final is certainly something that I really want to do.

“I don’t think I’ve beaten Salford since I’ve got over here so it’s certainly not a team I’ll be taking lightly.”

In fact, Salford are the only team that Austin has faced since he arrived at Warrington that he hasn’t tasted victory against, and one of only two he hasn’t beaten in his entire career – the other being Brisbane Broncos.

Salford have won four of the last six meetings between the two sides, but it is Warrington that start the game as 1/4 favourites with Betfred, while the Red Devils are priced at 10/3.

🔜 This time tomorrow, we'll be underway!

🗞️ Why not get yourself in the mood for @Coral #ChallengeCup Semi-Final Saturday with the official digital matchday programme?

The two most successful clubs in Challenge Cup history meet in the first of the day’s semi-finals, as record 19-time winners Wigan take on Leeds, who have 13 Challenge Cups to their name.

Coach Adrian Lam, who won the competition as a player with Wigan in 2002, could join an elite list of stars to have won as both player and coach, and he is well aware of the importance of the Challenge Cup, which Wigan won for eight consecutive years up to the start of Super League in 1996.

He said: “It was one of the competitions I looked up to as a young boy in Australia.

“I always wanted to be a part of it as a player and it was the main reason I signed with Wigan.

“It’s etched in the club’s history and to only have won it three times in the Super League era is an incredible stat. We’re aware of that and we’ve talked about it.

“There’s only Sean O’Loughlin, Tommy Leuluai, Zak Hardaker and Liam Farrell who have won it and we have a lot of young players in the squad, so we’ve spent a lot of time showing them who we are and what we’ve achieved in the Challenge Cup.

“If you ask the fans, most of them would say this is probably more important than the Grand Final because it’s been here for a hundred years.”

Hardaker’s Challenge Cup winners medals came during his time at Leeds, who have put themselves back in the reckoning for trophies this season after a difficult 2019.

Wigan have a hoodoo over them in recent times though, winning the last five meetings – including a 28-10 win in St Helens last month.

The Rhinos haven’t reached Wembley since 2015, which was their fifth final in six years.

Their squad has undergone somewhat of an overhaul since then, through a combination of the retirement of their dynasty of stars like Kevin Sinfield, Danny McGuire and Rob Burrow, and underwhelming recruitment since.

Veteran forward Adam Cuthbertson, who leaves to join York at the season’s end, said: “There’s a lot of players in the team who haven’t played in a final or a semi.

“People have been furloughed and lost jobs and businesses have gone under throughout this year, so I think if there was ever a time to have something to bring back and cheer and talk about it’s this year, so it’s probably more important than ever really.”

Wigan are 4/11 favourites to beat Leeds (9/4), with Warrington the outright favourites to win the competition overall – so the bookies fancy a Wigan-Warrington final, though it wouldn’t be the biggest surprise if it turned out to be Leeds v Salford.