Castleford climbed up to second in the Betfred Super League table as they inflicted a fourth defeat of 2020 on St Helens at the Mend-a-Hose Jungle.

With nearly all sport across the United Kingdom being cancelled as the country comes to grips with the coronavirus pandemic, rugby league took centre stage.

Super League clubs are set to meet on Monday to discuss the impact of the outbreak, with the competition expected to be possibly postponed or shut down ahead of updated government advice.

But the Tigers made sure their strong start to what could be an abrupt season continued, notching their fifth win thanks to Olpherts’ double.

In a full-blooded contest Saints had two players yellow-carded for high tackles.

In the fifth minute Olpherts barged his way over, but the try was chalked off because of a forward pass from Peter Mata’utia in the lead-up. Four minutes later Theo Fages was inches away from a try at the other end, but the ball just ran dead from Jonny Lomax’s kick.

In the 11th minute the breakthrough came for the home team. Mata’utia ran a short line and was too strong from close range, busting over off Danny Richardson’s pass.

Richardson added the extras to make it 6-0.

Soon after, the Tigers lost Massey to a concussion test with Grant Millington replacing him. 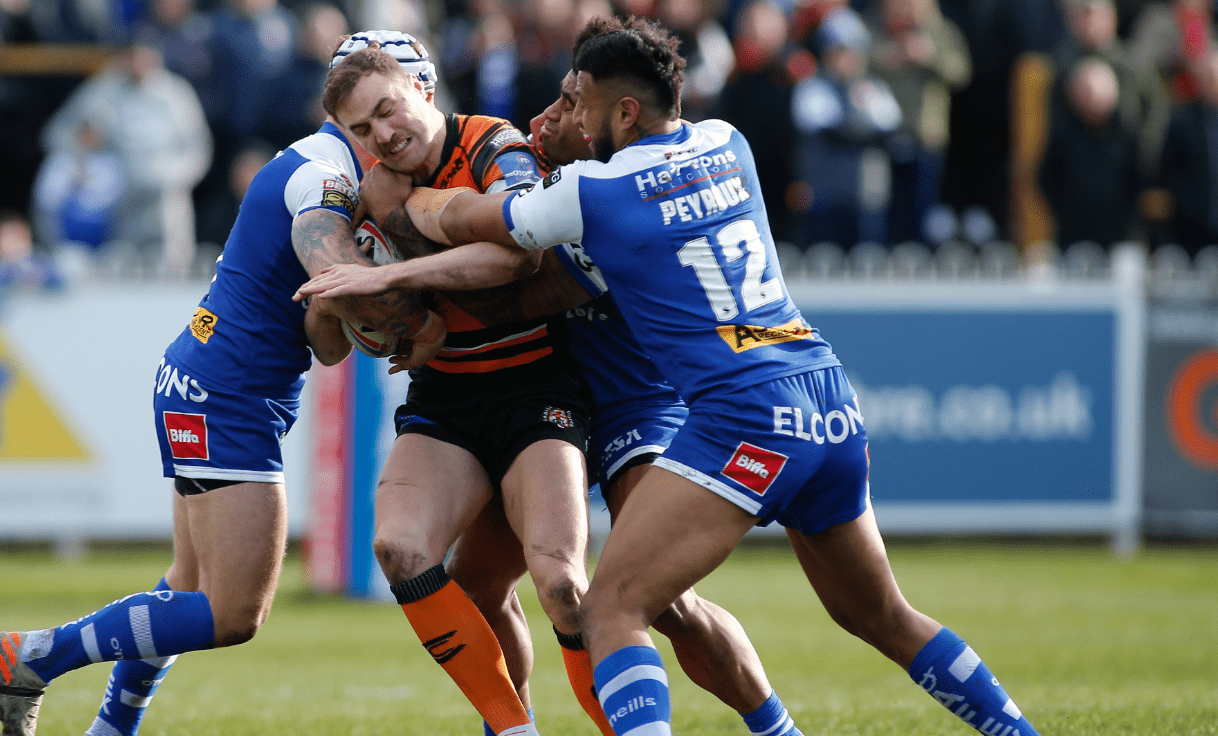 Errors and penalties from St Helens ensured Castleford enjoyed more of the ball. The Tigers made the most of it and a quick shift to the right was finished off by Olpherts touching down in the corner, but Richardson’s conversion attempt from the sideline sailed wide.

The half-back went close to creating another try but his pass was intercepted by Regan Grace.

More mistakes from Saints meant they rarely threatened Castleford’s try-line and it went from bad to worse in the 29th minute as tempers flared when Jordan Rankin was hit high with a tackle from Matty Lees, with the St Helens prop being sent to the sin bin.

With seven minutes left in the half Olpherts dived over in the corner to complete his brace. Richardson hooked his attempt but the Tigers still had a commanding 14-0 lead.

Right before half-time Tommy Makinson hit back when he touched down out wide – the winger could not convert his own try but Saints had some hope at 14-4.

In the second half the visitors almost grabbed a second score when Grace’s grubber kick caused havoc, but a knock on from Louie McCarthy-Scarsbrook straight after eased the pressure on Castleford.

McCarthy-Scarsbrook was then sidelined for 10 minutes for an ugly high shot on Richardson.

St Helens’ execution was off and the Tigers’ defence matched anything their opponents could throw at them.

Cheyse Blair sealed the result when he barged over in the 55th minute. Richardson could not add the extras but the lead crucially moved to 18-4.

The half-back added two penalty goals and then Jack Welsby crossed for a consolation try.

Jake Trueman grabbed a four-pointer from a Paul McShane kick before Luke Thompson touched down for the final try.

Challenge Cup draw moved back to the UK