The two Grand Finalists from last season are the top two in the French Elite Championship league table at Christmas.

Carcassonne have won nine of their 10 games so far, only losing once to Lezignan back in October.

The arrival of Morgan Escare from Salford has helped them to a prolific run of wins in to the festive period, with the speedy full-back having already scored 10 tries since his return to his homeland.

The Canaries put 50 on Villeneuve and Toulouse, as well as recording an impressive 19-0 win away at nearest rivals Limoux.

Limoux, who were beaten 20-16 by Carcassonne in last season’s Grand Final back in May, have slipped up twice in the first part of the season.

As well as that 19-0 defeat to Carcassonne, they were beaten 23-22 by Albi, with Pierre Carivenc’s drop goal the difference.

Big-spending Lezignan, whose star-studded line-up includes James Maloney, Corey Norman and James Segeyaro, are well within touching distance having won eight of their 10 games so far too.

They were thrashed 56-10 by Limoux in November, and also suffered a surprise 30-20 reversal at the hands of St Gaudens.

Rounding off the top four is Albi, with six wins from 10.

Pia (5-5), Avignon and St Gaudens (both 4-6) will be hoping a better second half of the season can propel them in to title contention.

Toulouse (2-7) and St Esteve (3-7) are the respective reserve sides of the country’s professional clubs.

Villeneuve have endured a difficult season, and have lost all nine of their games – conceding on average more than 40 points per game. 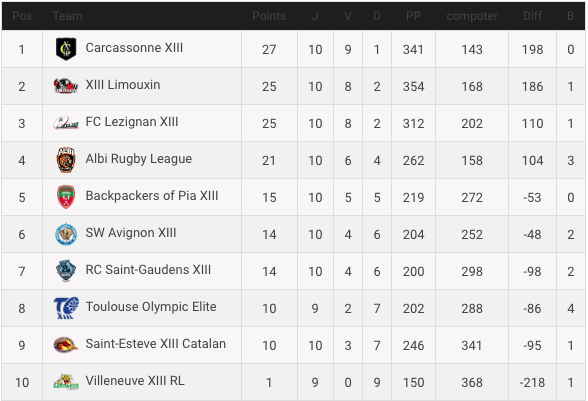 READ NEXT: Catalans to face French Elite Championship select side

The club believe in me and I believe in this club: Brodie Croft on new historic contract