There were ups and downs for the Brits in round 19 of the NRL.

In what was undoubtedly his best game of the season so far as Hodgson put forward a clinical performance to dismantle the Warriors in the Raiders’ 46-10 win on Saturday. The dynamic playmaker further established himself as the number one choice at hooker for Great Britain with an inspirational display that was Canberra’s biggest win of the year thus far. The 29-year-old’s lethal build-up play and attacking mindset accumulated with his first try of the season along with a collection of signature moments that we have become so used to seeing from the Canberra dummy half – a strip leading up to Michael Oldfield’s try as well as playing a huge part in setting up tries for Sia Soliola and Bailey Simonsson.

Overall, Hodgson made 69 metres from six carries, 23 tackles and two try assists in a game that truly solidified the Green Machine’s status as not just a top four team – but a a true title contender. 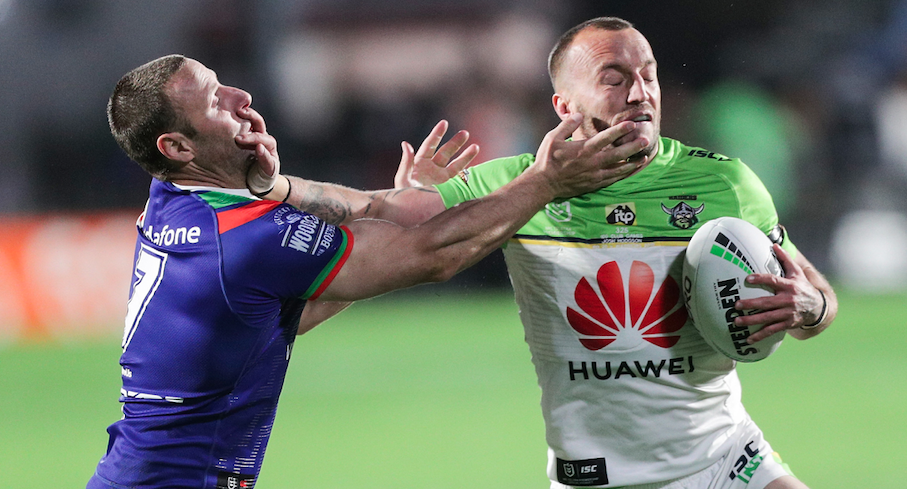 After a defeat to the Broncos last week, the situation did not get any easier for Gold Coast over the weekend as they came up against a huge roadblock in the Roosters and once again feeling the pain of a heavy defeat. A merciless 58-6 win for the Chooks proved to be the ultimate embarrassment for a Titans side that is now staring down the barrel of a wooden spoon with only four games remaining of the regular campaign.

Despite a 100-metre plus and 20 plus tackle effort against Brisbane last week, there was at least a little bit of optimism that it could lead to better attacking potential from Gold Coast’s backline but coming up against the Roosters is always going to be the biggest of tests. The 28-year-old finished with 52 metres from six carries and 19 tackles in their heavy defeat to Trent Robinson’s men.

The threat of the wooden spoon remains a huge possibility as they sit dead last and four points behind their nearest rivals in the Bulldogs. The problem all season for the Titans remains the inability to take chances on an attacking front but the inclusion of Watkins could still prove to be the spark that the Titans need in future seasons. However, if anything is to come from this season then it is now or never. 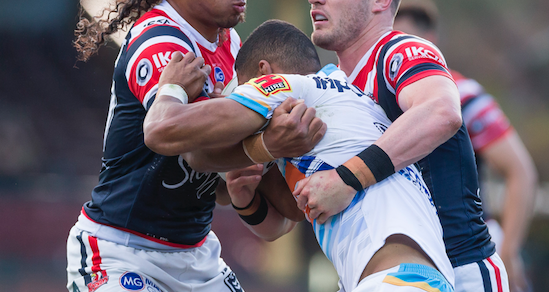 In a wasteful 12-4 loss to the Eels on Sunday, the Dragons suffered their fifth straight defeat and the chances of a top eight finish all but diminished in the process. It has been a surprisingly poor season from Paul McGregor’s men who lost Widdop for the most part due to a shoulder injury and now stand with a 6-13 record for the season. The return of the 30-year-old at stand-off last week almost proved fruitful as they stood less than minute away from a win over Souths before a last-minute try broke the Dragons’ hearts.

However, in the game against Parramatta, both teams failed to take most of their chances in a poor quality affair. After going into half-time 10-0 down, St George Illawarra came out with the threat of getting back into the game as Widdop rose to occasion by jumping high to knock the ball back to Mikaele Ravalawa who would cross over into the corner to make the scores 10-4. However, it would prove to be the last and only points of the game for the Red V in another disappointing showing.

Despite being somewhat overshadowed by the likes of Hodgson and John Bateman this week, the 29-year-old put in a steady amount of work with 70 metres from 10 runs and 16 tackles to his name. As mentioned in the past, although Whitehead does not always put forth the biggest of stats compared to the likes of Bateman, there is no escaping the fact that the back-row general is a beacon of consistency.

Along with being a mainstay all season, Whitehead has been a tackling aficionado, making 573 tackles throughout the year which has been a pinnacle in the improvement of the Raiders’ valiant defence this season. Now, with four games left, the second-rower’s influence should never be underestimated as he continues to be a vital cog in the Green Machine.

It was not to be the most welcoming of returns for ‘Slammin Sam’ as he played his first game since undergoing shoulder surgery before suffering an infection not long after. The 30-year-old’s Rabbitohs came up against an inspired Cronulla side who more than needed a big win to keep within the top eight. Souths’ poor performance also showed up in the stats for the bruising second-rower, who obviously looked to have suffered some match fitness. In his time on the field, Burgess could only manage 40 metres and 18 tackles to his name and failed to spark any life into a frustrated South Sydney team.

It was a definitive loss for the Bunnies as they try to chase second place on the ladder but now they have the likes of Canberra, Manly and Sydney around them in the table. They now sit in fourth after starting the weekend in second, with the loss to Cronulla providing to be a huge wake up call to Wayne Bennett’s men. 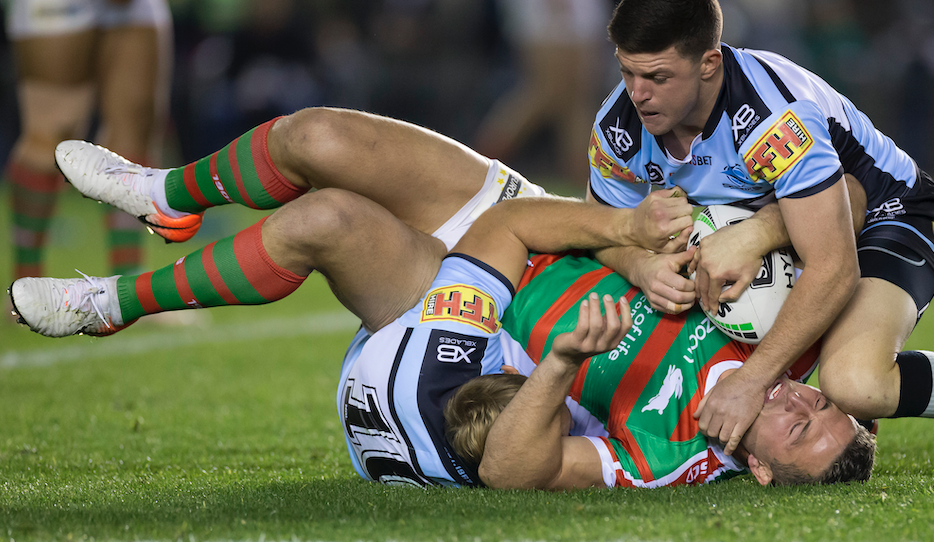 Alongside Hodgson, the 25-year-old was an inspirational figure in Canberra’s huge win over the Warriors over the weekend. Once again, Bateman was one of the Raiders’ defensive powerhouses, leading the way in tackles for the men in lime green with 37 and then another 100-metre running display to top of it off. The Raiders now sit in third place and are level on points with both Sydney teams after a great run of form.

The former Bradford and Wigan star remains at his electric best and an integral member of not just the Raiders’ back-row but the entire Canberra set-up. Now, if the likes of Bateman and Hodgson can continue with their most recent red-hot form then Ricky Stuart’s men won’t be far off picking up silverware at the end of the year. 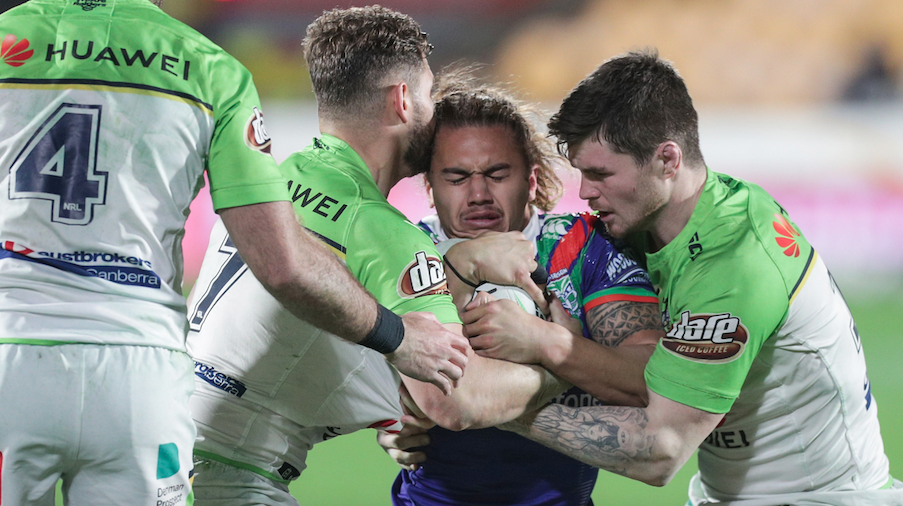 The 33-year-old was once again a bright spot in an otherwise poor display from the Dragons against the Eels. The veteran provided a great defensive workload with the second most tackles by a member of his side with 34 as well as putting in solid work with the ball in hand, making 96 metres from 12 carries.

Just like with Whitehead and the Raiders, Graham has been a steadily efficient and consistent performer for St George Illawarra, despite the underwhelming season for his team. The hard-working prop might have missed a few games due to a broken leg but he has still made the fifth most tackles this season by a member of his side with 466 tackles. Although he might not be the biggest metre-maker for the Dragons, he still averages a very productive 80 metres per game. 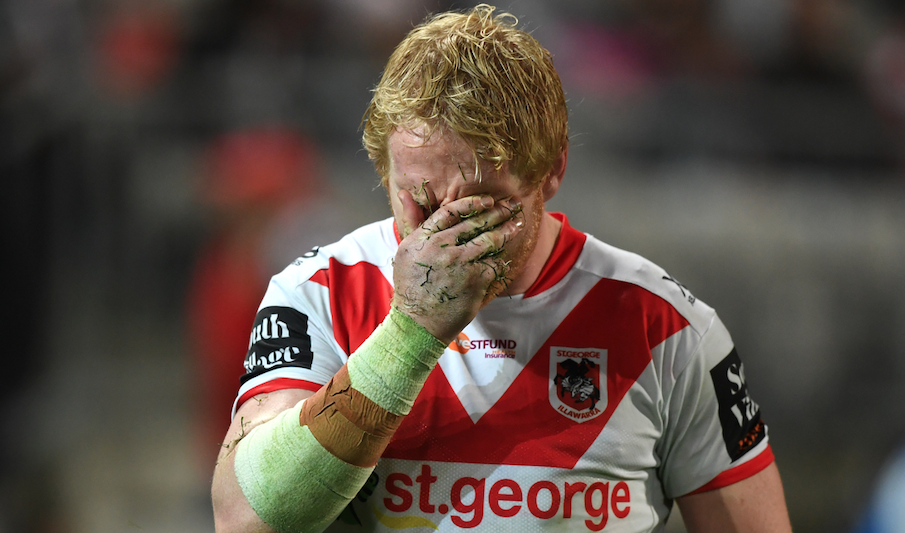 Even the score was 39-24 in the end, the Rabbitohs never looked properly in the game against the Sharks and just like his brother Sam, Tom failed to make his mark on the game like what we have seen in the past. The 27-year-old racked up 57 metres and the fourth most tackles by a Souths player with 23 in what was one of the Bunnies’ poorer games this season.

Over the course of the season, we have seen some monster displays in the running game by Burgess. Souths have laid solid foundations through the forwards’ strong charges. Looking into the last four games of the season, it becomes pivotal now that the Bennett’s men can get back to those ways once again if they want to keep in the race for second.