Round 23 of the NRL season is in the books and we now find a collection of British talent fighting it out for a top four spot as we get closer to the NRL Finals.

The Raiders looked to secure a top four spot with a win over Manly on Sunday but found it hard work containing the the Trbojevic brothers in the Sea Eagles squad. Hodgson and the Green Machine succumbed to a tough 18-14 loss which now means that Canberra, Manly and South Sydney are tied in third with 30 points a piece.

The 29-year-old will be left contemplating a misplaced pass in the 51st minute which saw Jack Gosiewski take the interception downfield to allow Reuben Garrick to score – a costly mistake, especially when you take into account the Raiders were 10-4 ahead. The Raiders were able to finish strong in the last 10 minutes but just could not find a way through a dominant Manly defence.

As always, the numbers made good reading for Hodgson though, making the second most tackles by a Canberra player with 26 and taking his tally for the season to 642. Although he might have made the second most tackles by a Raiders player for the season as well, the dynamic playmaker boasts the best average with 33.8 per game. The Green Machine now have two tricky games to contend with to end their season, facing the Sharks and the Warriors – both of whom will not be considered walkovers. 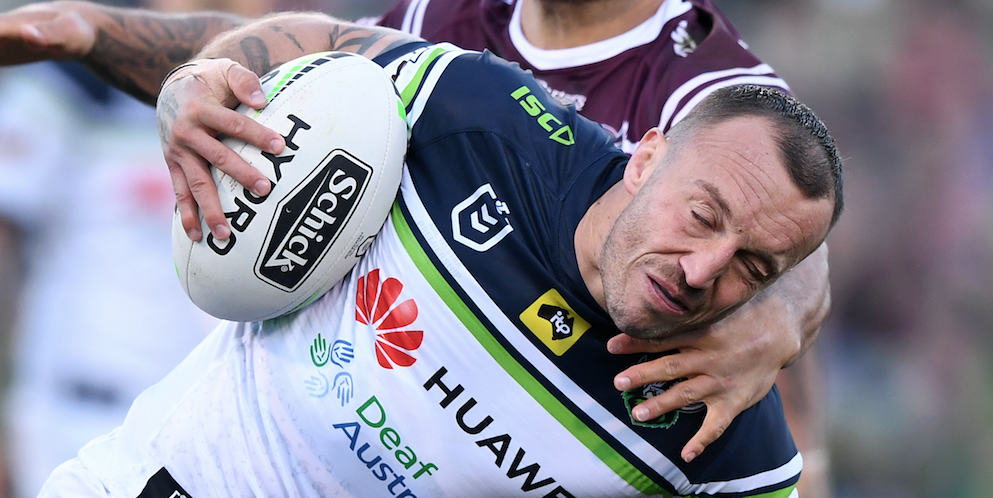 Well, what can you say about the Dragons this season? Their year has been hampered by injuries with close games just not going their way. They came into round 23 in 15th place and looking to finish their season with a fine amount of confidence and positivity. However, they were met by the brick wall that is the Sydney Roosters, who in the end showed no mercy by claiming a 34-12 win.

The match-up saw the likes of Widdop and Cooper Cronk go toe-to-toe in the battle of the halves but it was the latter that would totally outshine his counterpart in a difficult day for Paul McGregor’s men. Now with two games left, St George Illawarra are at least safe from being subjected to the wooden spoon but it still does not take away how disappointing of a season it has been.

The Dragons now face the Tigers and the Titans in their last two games of the season and if they want to finish the year on a high note then the half-back combination of Widdop and Corey Norman needs to find a way to click on a more consistent basis.

To say that Bateman has been a largely consistent performer over the course of the season is probably seen as more of an understatement now. Despite a tough loss to Manly, Bateman was still able to make an impact as an effective ball carrier as well as being a powerhouse in defence. The 25-year-old made the most tackles by a Canberra player with 32 alongside a solid 91 metres from 12 carries, meaning he now has the third most tackles and fourth most run metres by a Raiders player for the season.

The loss to the Sea Eagles may have been a slight bump in the road but from what we have seen from Bateman and Canberra in the last couple of couple months, they certainly have the ability to finish strong. Now with only two games to go, the pressure remains on as Ricky Stuart’s side look to end their impressive season in style and secure that coveted top four finish. 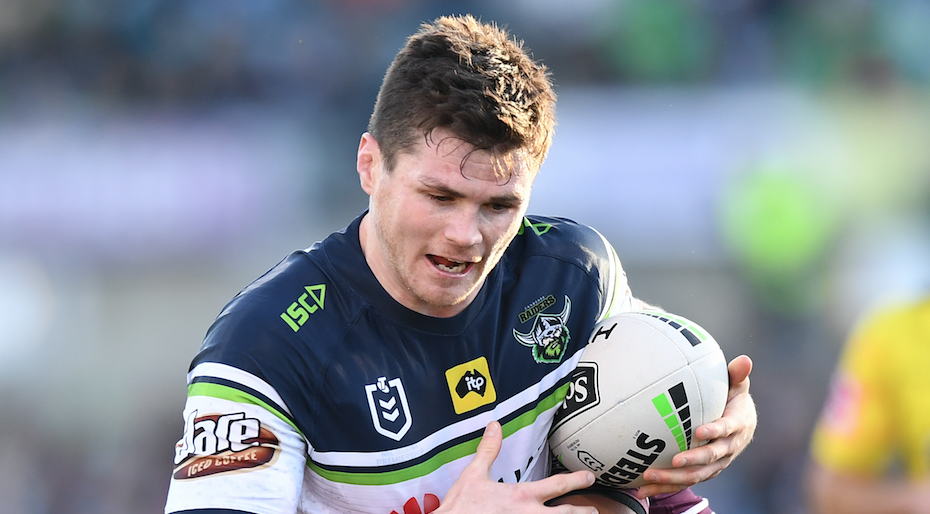 The 33-year-old was able to rack up 96 metres alongside making 19 tackles in the loss to Sydney on Saturday. It may not have gone a long way in helping the Dragons secure a lucrative victory but it still further establishes his nature as one of his side’s workhorses by putting in another solid shift.

The former St Helens man has now made the fourth most tackles for the Red V with 546 and the ninth most metres with 1,472. They might not be the standout stats for the Dragons but when you consider the fact that Graham has missed time out due to a broken leg and the fact he has the second highest average for tackles per game by a Dragons player then it becomes all the more impressive.

His international and club team-mate in Hodgson might be chasing him down in this regard but Whitehead still continued his dominant defensive ways as he leads Canberra in tackles for the season with 648. Even if he does not hold onto that spot, it should not matter in the slightest as Whitehead’s influence in the second-row has been nothing short of pivotal for the top four chasing Raiders.

It might not have been the most effective day we have seen from the 29-year-old with 22 tackles and 48 metres to his name but his averages for the season continue to show a workhorse on both sides of the ball. The former Bradford and Catalans man has an average of 29.5 tackles and 70 metres per game in solid and influential year for the back-rower and has been pinnacle to a much improved Canberra defence. 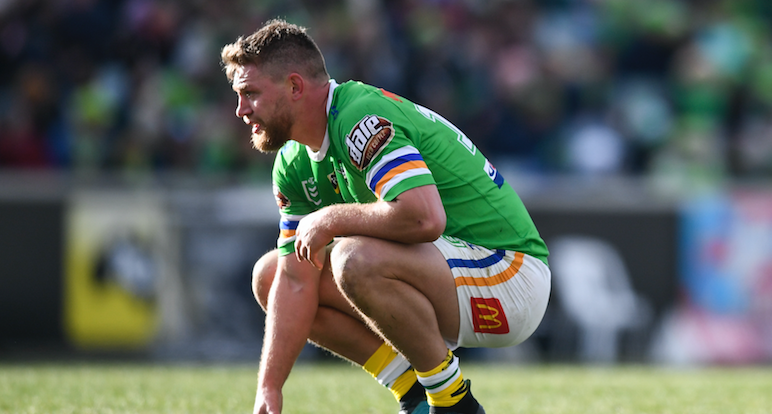 When the score read 8-6 in favour of the Titans at half-time against title chasing Melbourne, many were probably thinking that there was some form of error as Gold Coast were able to take advantage of some uncharacteristic work from Melbourne.

However, with what has been the case plenty of times this season, the Titans simply just could not hold on to such a narrow lead or even extend it, with the Storm shaking off that dreadful first half to condemn Gold Coast to yet another defeat.

The 28-year-old put up 94 metres against the Victoria-based side as he still looks to adjust to life within the NRL. In his five starts, he has a total of 389 metres from 56 carries which gives him an average of 77 metres a game. The Titans now face Newcastle and St George Illawarra in their last two games of the season and even though they will claim the wooden spoon this year, they can still continue show the incoming Justin Holbrook some fight at least. 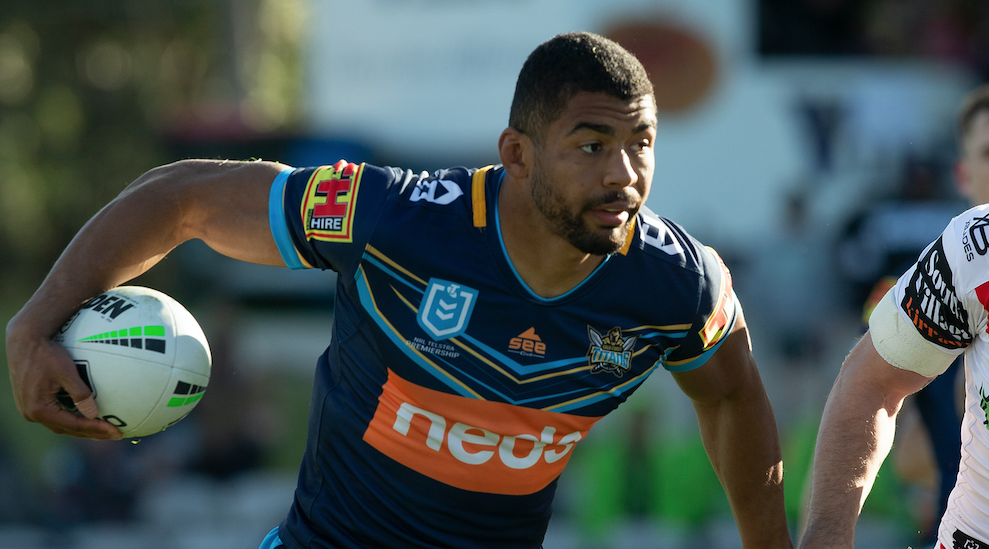 The Raiders might have been handed a loss by the Sea Eagles but the 23-year-old probably put in his best performance since returning from injury. Before his injury, Sutton made a great impact in Canberra’s back-row with an incredible engine that saw him show off his skills as an elusive ball carrier and a hard worker in defence.

In the game against Melbourne, the former Wigan man made 92 metres and the third most tackles by a player in lime green with 25. Despite missing time through injury, the display means that Sutton still has the fifth most tackles by a member of his side with 468, averaging 26 per game. The race for the top four remains wide open with two games still to go and if Sutton keeps building on these performances then his connection with Bateman and Whitehead in the back-row will continue to be pivotal. 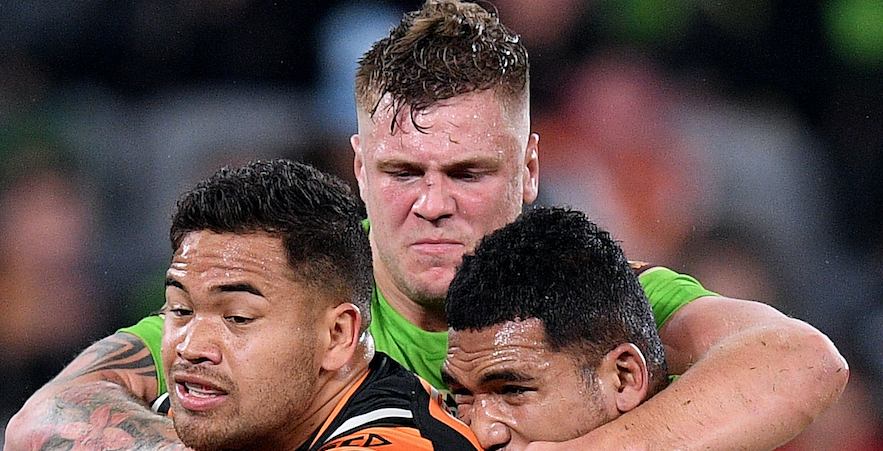