Toronto director of rugby Brian Noble insists the Wolfpack’s new TV deal can only be a positive for the growth of the Championship.

Rugby League’s first transatlantic side struck a deal with Sky Sports to ensure that all their home and away games will be shown live for the first time on the channel.

The agreement means that all second-tier sides will have at least two games shown on TV in 2019, and Noble thinks the game as a whole will be all the better for it.

“It’s exciting times and I think there’s been a lot of hard work going on behind the scenes to ensure that it happens,” he told loverugbyleague.com.

“We’re really chuffed with the fact that we’ll be shown every week, home and away.

“We think that the Championship is a wonderful competition. We’ve earned our stripes in relation to climbing the league ladder, but everything that we have tried to do along the way is tinged by an element of positivity.”

Despite their rise to the Championship, Noble accepts that there are many fans who are sceptical of what the Wolfpack are trying to do.

Nevertheless, he believes that Toronto are doing everything for the right reasons as they bid to make rugby league a major sport in North America. 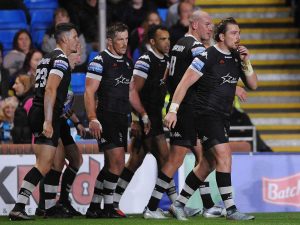 When asked about the discontent towards Toronto, he said: “I don’t know [why]. That’s something that others have to articulate, but we deal with facts, and the facts will show that we’ve been nothing but positive for the game.

“We feel that North America has fabulous potential. We’ve made some mistakes along the way, but on the whole, everything that we’ve done has been largely positive.