Two Salford fans thought they had won a £23,400 bet – but bookmakers William Hill are refusing to pay out.

Kris Shenton and friend Gary Smeaton backed the Red Devils back in January when the odds were stacked against Ian Watson’s side.

The pair paid £50 each to place £100 on a “double” accumulator bet, with one backing Jackson Hastings at 25/1 to be named as Super League’s Man of Steel and the other tipping Salford to finish in the top five at 8/1.

And they thought they were £23,400 richer on Sunday night as Hastings was crowned the 2019 Steve Prescott Man of Steel, with Salford having clinched the top five spot several weeks ago. 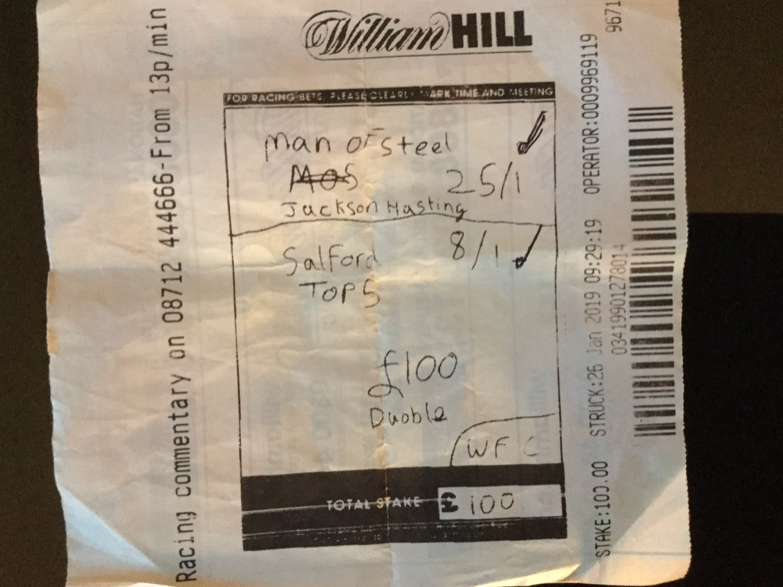 However, William Hill have said they regard the duo’s “double” bet as two “single” £50 bets and are prepared to pay out £1,700 to Kris and Gary.

Gary told the Manchester Evening News: “I put the bet on nine months ago at the Swinton branch of William Hill. The guy in the bookie’s wrote it out for me.

“I am not settling for that. I will take it all the way, The Chief Executive of William Hill has refused to speak to me.

“I went back to the branch where I placed the bet and the person who wrote it out for me said he ‘must have been half asleep’ when he did it.”

In response to Gary and Kris, a William Hill spokesperson said: “As stated in our rules, a related contingency occurs when one or more parts of the bet placed affect the outcome of the bet.

“In this case, the prices of Jackson Hasting winning Man of Steel and Salford finishing in the top five are related. Were one outcome to happen, the other would be directly affected and as such the double price would be significantly smaller.

“This bet has been struck as a result of human error and as such has been corrected. At no point was the double on offer before the start of the season. Unfortunately, we realise this is disappointing for the customer and we can only apologise.

“In cases such as this, IBAS (Independent Betting Adjudication Service) offer an impartial adjudication on disputes between customers and licensed gambling operators.”

We should be celebrating Toronto Wolfpack, says Kevin Brown

Off the Record: Rugby League Rumours and Gossip #184