A guard of honour welcomed 80-year-old Brian Rishworth as he took to the field playing Masters rugby league at the weekend.

The Eastmoor Dragons master became only the second player to wear the light blue shorts for 80 and overs, following on from Blackpool’s Jim Aimes.

He received the shorts from Masters treasure and referee lead, Paul Field, prior to the Dragons game with Stanley Rangers.

While Brian went back to the changing rooms to swap green for blue, both teams formed a guard of honour for Brian to enter the field of play.

After playing some long minutes in the Masters game, Brian was centre stage again as his fellow Eastmoor Dragons presented him with a commemorative trophy and a ball signed by all the players from both teams on the day.

Brian explained that he “just wants to continue to play Masters and to enjoy himself for as long as possible.”

Asked what he thought of now playing in blue shorts his response was “It’s just the same as gold and green.”

Brian’s final comment of the day, summed up his attitude to life and playing Masters Rugby League “What’s the next short colour?” 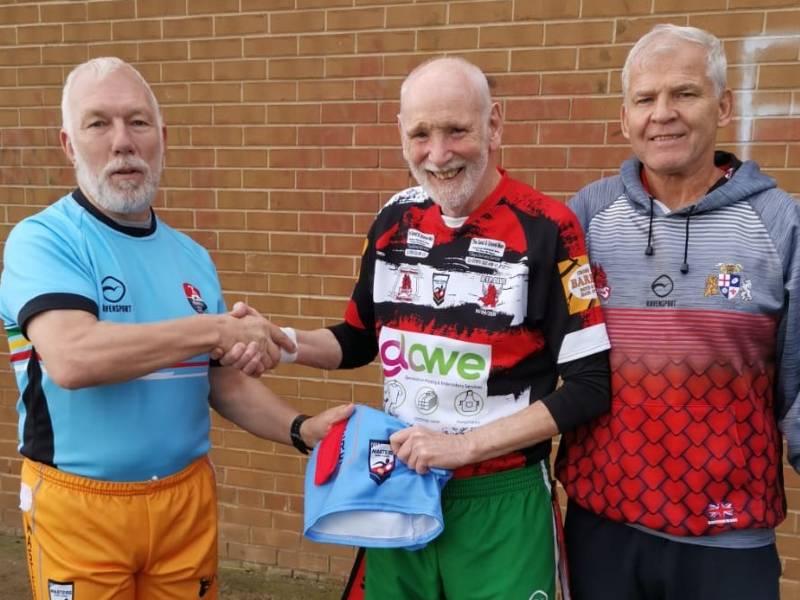 What is Masters Rugby League?

Masters Rugby League is a social version of the sport aimed at players over 35, with slightly modified rules to cater for older players.

There are more than 2000 registered players across the country, with teams ranging from Southampton to Newcastle, West Cumbria to Medway and Hull to Blackpool.

Games are based around the spirit of Masters, with no winners, no champions, no leagues or cup finals – simply about enjoyment and having a good time, on and off the pitch.

Players aged 35-39 wear white shorts and players 40-49 wear black, with these players tending to tackle each other normally.

Players 50-59 wear red shorts, and these players must be physically stopped and held on attack; and then in defence, have a definite two handed positive hold on the attacker.

No contact is permitted, with the exception of removing the tag of the shorts to denote a tackle. Tackles are made by these players by simply touching an opponent.

There are a number of other variations to the rules, including a minimum five metre retreat at the play the ball, kicks only allowed on the last tackle and no six again rule.

About James Gordon 7296 Articles
Love Rugby League editor. Founded the website back in 2005. Worked with a range of clubs and sponsors during that time. Also commentates for BBC.
Website Twitter LinkedIn