Batley moved three points clear of fierce rivals Dewsbury with a 30-14 victory in the penultimate game of the Betfred Championship Summer Bash.

Despite being a tense contest for large swathes of the match, the Bulldogs managed to pull away in the closing stages to inflict a record victory over their neighbours at Bloomfield Road, despite two late tries from Lee Greenwood’s side.

In a typically-contested Heavy Woolen derby, Matt Diskin’s team raced into an early four-point lead as Keenan Tomlinson picked up a bouncing Alistair Leak pass before diving over spectacularly in the corner for his first try of the season.

Johnny Campbell extended their advantage to 10-0after catching the Dewsbury ruck defence knapping and stretching out to score, but Andy Gabriel reduced the arrears midway through the half with a similarly impressive dive in the corner after the Rams chanced their arm on the last.

Jouffret extended the Bulldogs’ lead to eight with a penalty goal early in the second half, before Paul Brearley outmuscled Adam Ryder in the right corner and squeezed over for the game-clinching try.

With just five minutes left, Batley added some gloss to the scoreline as Leak scampered over from dummy-half to add a try to his first-half assist.

There was even time for David Scott to cross under the posts, the full-back doing well to support Brearley’s break from halfway.

However, the final points went to the Rams as Michael Knowles was able to dart over close to the line after Samy Kibula’s superb offload under pressure, before Sam Day collected his own chip-and-chase to round off the scoring at 30-14.

War of attrition in the Blackpool sunshine

From midway through the first period, it was clear that the winners would be whoever could sustain their high levels of intensity for the longest.

With all four wingers eager to get hands on the ball down the centre of the park, the forwards did have some minor respite, but in the end the sheer weight of second half territorial advantage paid dividends for the Bulldogs.

Dewsbury did have chances to get themselves back into the game prior to Batley’s try-scoring blitz in the second half, but they didn’t fully click into gear until the game was gone,

Now, they must now try and make up the three-point gap to Batley in the table if they are to have the local bragging rights at the end of the season. 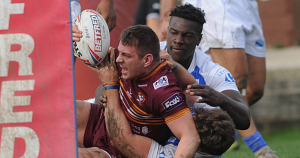 Considering Leak had only returned from a business trip in Singapore three days before this game took place, his performance was impressive to say the least.

Alongside fellow hooker Reiss Butterworth, Leak proved to be a thorn in the side of the Rams all afternoon and picked up a try his effort certainly merited in the final 10 minutes.

If this is how Leak performs after every business trip, I’m sure Matt Diskin will be booking him another flight abroad in the near future!

This was different to many of the previous five games in this year’s Summer Bash in the sense that neither side did enough to merit a comprehensive scoreline in their favour.

Big tackles were flying in and both sides had chances to cross the whitewash, but in the end, Batley showed just enough composure to secure the two competition points.

Both sides are still languishing in mid-table mediocrity and look a little way off challenging the top five, especially given the points deficit they would have to make up.

Nevertheless, both know they are more than capable of picking up results against the higher-placed sides, and could have a major say in the final makeup of the table.