Over the years, we have been involved in a few sponsorship deals, which by and large included trade of service or reciprocal advertising. We chose a couple of our favourites.

Back in 2012, we became the title sponsors of Batley’s historic Mount Pleasant, one of only four grounds that hosted rugby league from its inception in 1895 until today (the others being Leeds, Wakefield and Widnes). It meant the ground became known as the LoveRugbyLeague.com Stadium, with signage outside the stadium and inside too – getting plenty of eyeballs, especially during the Championship’s televised years. It was made possible thanks to Gavin Wilson, who linked up with Paul Harrison at the club to broker the deal and help highlight it as a valuable commercial commodity for the Bulldogs. It worked, and eventually the stadium would be renamed to the Fox’s Biscuits Stadium in 2014. The launch of our sponsorship came prior to a televised game against against Swinton and we were brilliantly looked after by the tea lady at the club. 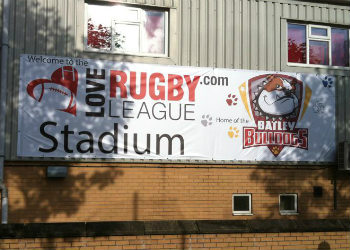 We were the sponsors for the groundbreaking video referee coverage on Premier Sports, which for the first time had the video referee explaining the reasoning behind his decision. Ian Smith was a regular on this feature, and we now continue to work with him on the State of Mind project.

Arguably one of the greatest kits of all time was produced by O’Neills as part of our sponsorship of our most local team, Warrington Wizards, when they were playing in National League 3. Playing out of Wilderspool, the team enjoyed a relatively successful season and we offered support with developing a website and social media management. Due to the re-structuring of the game and the amateur game’s switch to summer, they would merge with Woolston Rovers and move back to the National Conference League. 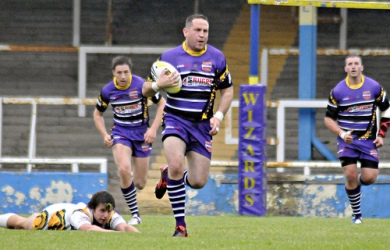 Back in the days of Last Tackle, our first major sponsorship deal was with Gateshead Thunder, with our logo appearing on their home and away kit during the 2008 season, when they romped to the National League 2 title. As part of the deal, we developed the club’s official website. Highlights included being part of their season launch night and of course seeing them win the title live on Sky Sports.

Over the past few years, the Love Rugby League logo has adorned the jerseys of Hunslet, London Skolars and York City Knights.